The moment a child leaves home can be an emotional one for both the child and their parents. For many of us leaving home also coincides with going to university (often in another town or city), so it's no wonder that most parents, whilst proud to have their child enter further education, are also worried about where they are going, how they will do, and often most importantly, how safe they will be. New research by student accommodation portal StuRents.com[1] sheds some light on this by showing, on average, how exposed a student will be to crime in each of England and Wales' student towns and cities.

The research covers 64 towns and cities, taking into account 535,468 crimes spanning the last year. Whilst the crimes affected both students and non-students alike (as no data is currently available for crimes specifically against students), all crimes took place around hubs of student accommodation. The research therefore hopes to give the best indication yet of the safety of students in our towns and cities.

The rankings are based on how many recorded crimes student areas experienced per thousand residents in the period between and including February 2014 and January 2015.

Of the 64 towns and cities researched Brighton is the clear loser here with an alarming 829 recorded crimes per thousand residents in the last year. Of the recorded crimes a Brighton student area had the highest rates of violence and sexual offences, burglary, and theft from the person[2]. 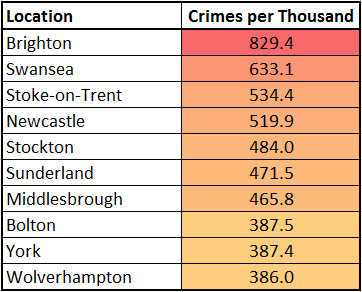 After Brighton in the rankings comes Swansea with 633 crimes per thousand and Stoke-on-Trent with 534. It's clear therefore that Brighton is somewhat removed from the pack with the difference between first and second place a sizeable 31%.

Digging down into the data shows people in the student areas of Swansea experienced the highest rates of drug offences.

The most robbery[3] however occured in the student areas of Wolverhampton, whilst Cambridge beat out rival Oxford for the dubious honour of having the highest rate of bicycle theft. 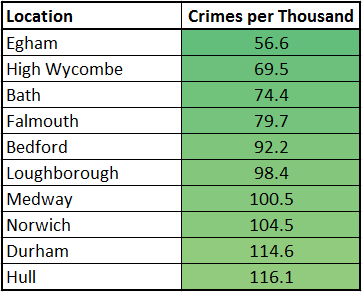 The research has revealed that students in Egham in Surrey (the home of Royal Holloway) experienced the lowest levels of crime of any students with an average rate of 57 crimes per thousand in areas where students live. High Wycombe comes a close second with 70 per thousand whilst Bath rounds out a southern dominated top 3 with a rate of 74 per thousand.

The research as a whole[4] has revealed that student areas averaged 248 crimes per thousand residents in the last year. This is far higher however than the national average of 99[5] indicating that students live in areas that experienced 2.5x more crime than residents of England and Wales as a whole.

"Crime statistics serve as an important metric for students looking to make an informed choice about where to live. Our research has uncovered the alarming statistic that students live in areas with crime rates 2.5 times higher than the national average. This year so far has been huge for investment in the student accommodation market. We hope that going forward student safety will be high on the agenda."

[1] Based on StuRents.com analysis of 535,468 crimes occurring in 64 towns and cities in England and Wales in the areas surrounding 608 private halls of residence.

[2] Source: crimestoppers-uk.org "Theft from the person is where items are stolen from someone without the threat or use of physical force, for example snatching items or pickpocketing."

[3] Source: police.uk "Robberies (including muggings, and snatch thefts) are crimes that often involve violence or threats."

[5] Based on StuRents.com analysis of 5,652,927 crimes occurring across England and Wales.

Officers to Decide on Bournemouth Scheme