In the last three months, UCAS released its latest data covering acceptances for the 2019-20 academic year.

The figures highlight the continued competitiveness of the market, with more prestigious universities capturing a greater proportion of demand compared to lower-tier institutions. Whilst this is not limited to Russell Group universities, it highlights the trend well. For example, total yearly acceptances at the 24 institutions increased by 24.6% between 2012-2019, whilst growth on a national basis was recorded at 16.4%.

Some of those institutions that have shown particularly strong long-term growth include Coventry University, which reported an increase in yearly acceptances between 2012-2019 of 87.9%, whilst numbers at Nottingham Trent University have grown by 69.3%.

At the other end of the spectrum, Southampton Solent University has recorded a decline in total yearly acceptances of 35.8% during this period, whilst those at Aberystwyth University have fallen by 31.3%. 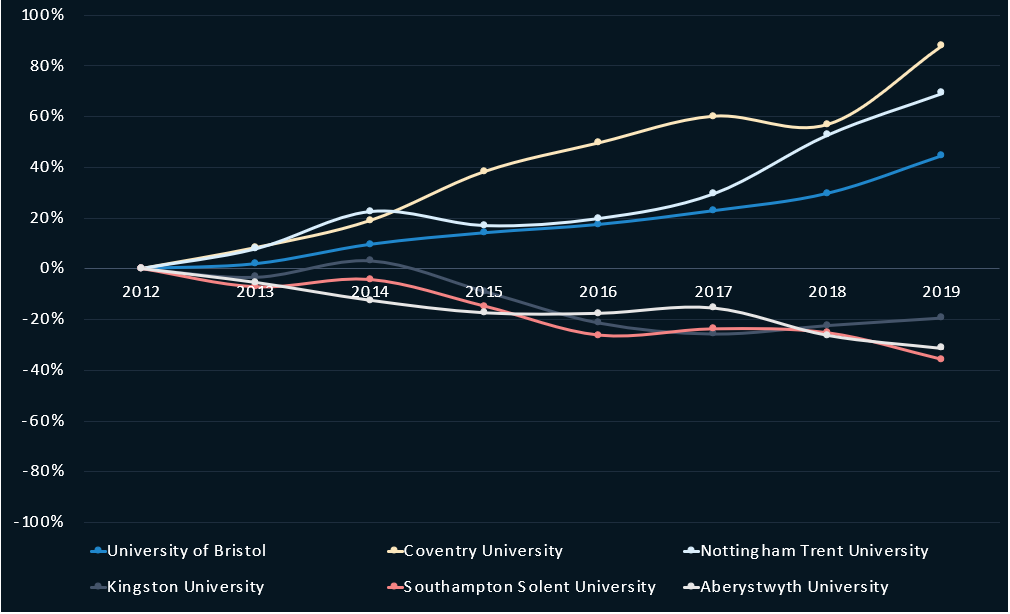 Underlying demand growth is a key driver in determining the attractiveness of a location from the perspective of an investor.

For example, Nottingham has attracted significant investment in the past few years following a 17.2% rise in full-time students between 2014-2018. This continued in Q1-2020 (Oct-Dec) with applications totalling more than 1,600 beds submitted, including five schemes each containing more than 200 units. Therefore, the number of beds (awaiting and approved) in Nottingham is equal to 28.3% (Q4-2019: 21.0%) of the current supply, as of the 2019-20 academic year.

Similarly, Coventry remains a popular location for new developments, albeit the city has reported a reduction in activity compared to previous years. Application activity peaked in 2017 when more than 6,000 beds were submitted and whilst almost 3,000 were lodged in 2019 it represents a noticeable slowdown.

Whilst demand growth is undeniably a key component when appraising a location, it should be considered in the context of supply growth. Sheffield is a testament to this, with new supply far outstripping growth in demand.

Such information can ensure developers are making more informed investment decisions, rather than using broad generalisations based on simplistic supply vs demand measures.

During Q1-2020 (Oct-Dec) demand shifted towards larger sizes with clusters and Houses in Multiple Occupation (HMOs) consisting of 4 beds the most popular choice. During the three-month period, 4 beds captured 24.5% of enquiries on StuRents.com. Meanwhile, those containing 5 and 6 beds also captured a substantial proportion of demand at 19.7% and 17.4% respectively.

Whilst studios were the preferred choice in the previous quarter, in Q1-2020 they equated to just 3.2% of enquiries made.

Meanwhile, outside of London, the average budget set by those house-hunting on the platform was £129.27pppw, compared to £120.68pppw during the equivalent period of 2019.

However, with the early house-hunting season dominated by domestic students, it's not unreasonable to assume this budget will increase as the season progresses, which is precisely the trend that played out during the 2019-20 season. 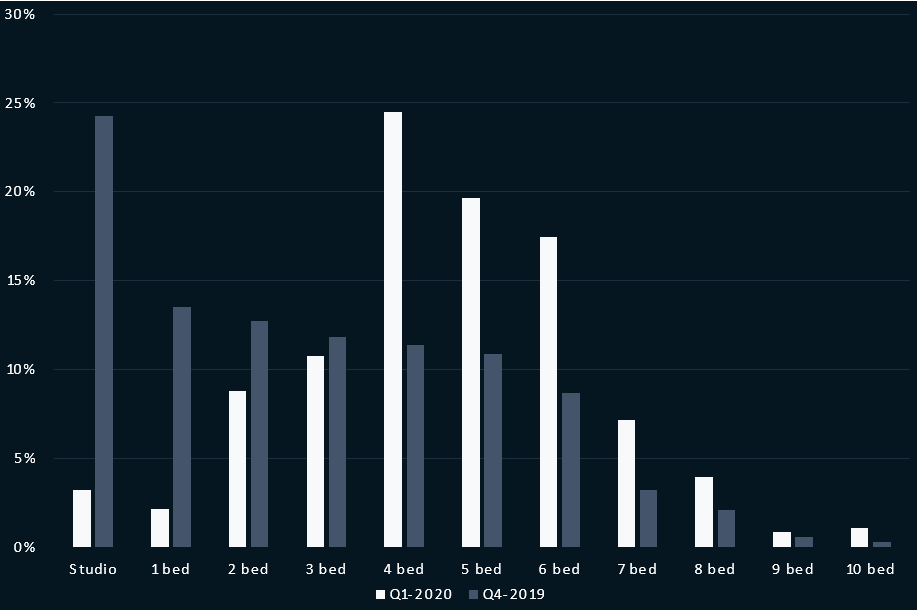 The extracts above have been taken from our Quarterly Market Reports covering all major university towns and cities across the UK and Ireland.

To understand more about our market leading analytics Register Here.