The latest figures released by HESA detail the breakdown of students studying in the UK by country of origin.

In the past academic year (2020/21), the number of non-UK domiciled students enrolled in institutions in the UK grew by 8.7% year-on-year, representing an additional 48.5K students. Over half of all international students (52.1%) came from countries in Asia. Looking at these enrolments at a country level, China continued to be the largest provider of students from outside of the UK.

In the academic year 2020/21, students from China represented the largest proportion of those from Asia, with 45.6% of all Asian domiciled students originating from China.

The total number of Chinese students continued to grow in 2020/21, albeit at a much slower pace than has been observed in recent years. The number increased by 1.4% following increases of 17.2% and 12.9% in the previous two years.

Despite the rise in total Chinese students, the number of first-year entrants declined by 4.9% (-5K) year-on-year. This marks the first reported decline since the 2007/08 academic year.

At an institutional level, growth across universities has been mixed with not all institutions reporting growth.

For institutions outside of London, the University of Glasgow saw the highest absolute growth in Chinese students YoY, increasing by 2.4K in total. When focusing on the larger institutions in the UK*, Glasgow also recorded the highest percentage increase YoY of 67.4%.

The University of Manchester, recorded the second highest growth YoY with an additional 2.1K Chinese students - an increase of 32.5%. 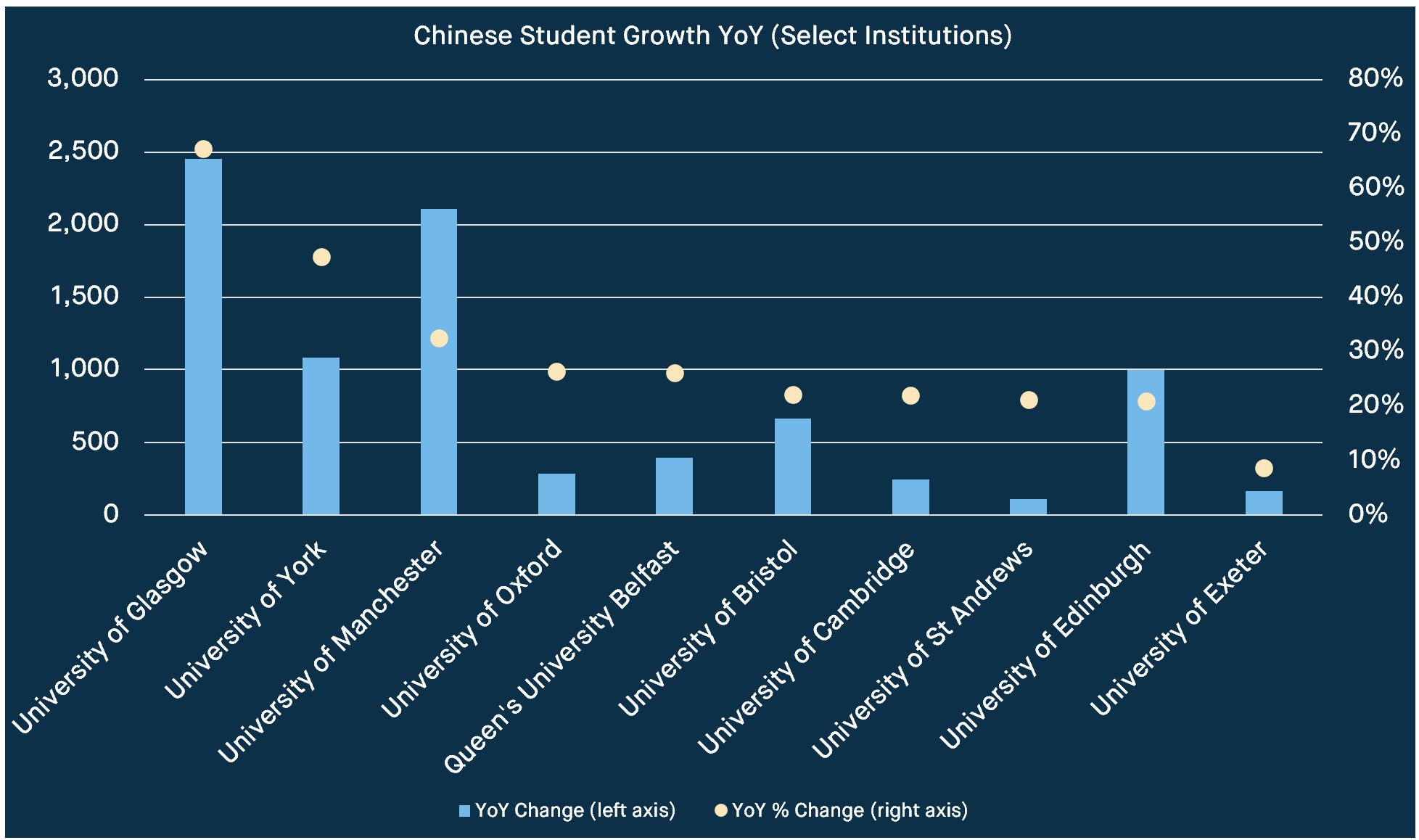 Long term, growth at the University of Glasgow has also been extremely positive, with 4.3K more students from China attending the university in 2020 compared to 2014 - an increase of 239%. Only the University of Manchester reported more significant absolute growth over the same period at 4.9K (130%).

In percentage terms, the University of Leeds saw the largest increase over the long term, with numbers up by 240% since 2014.

The University of Edinburgh has also shown an extremely positive trend, with Chinese internationals rising by 4.0K (225%). 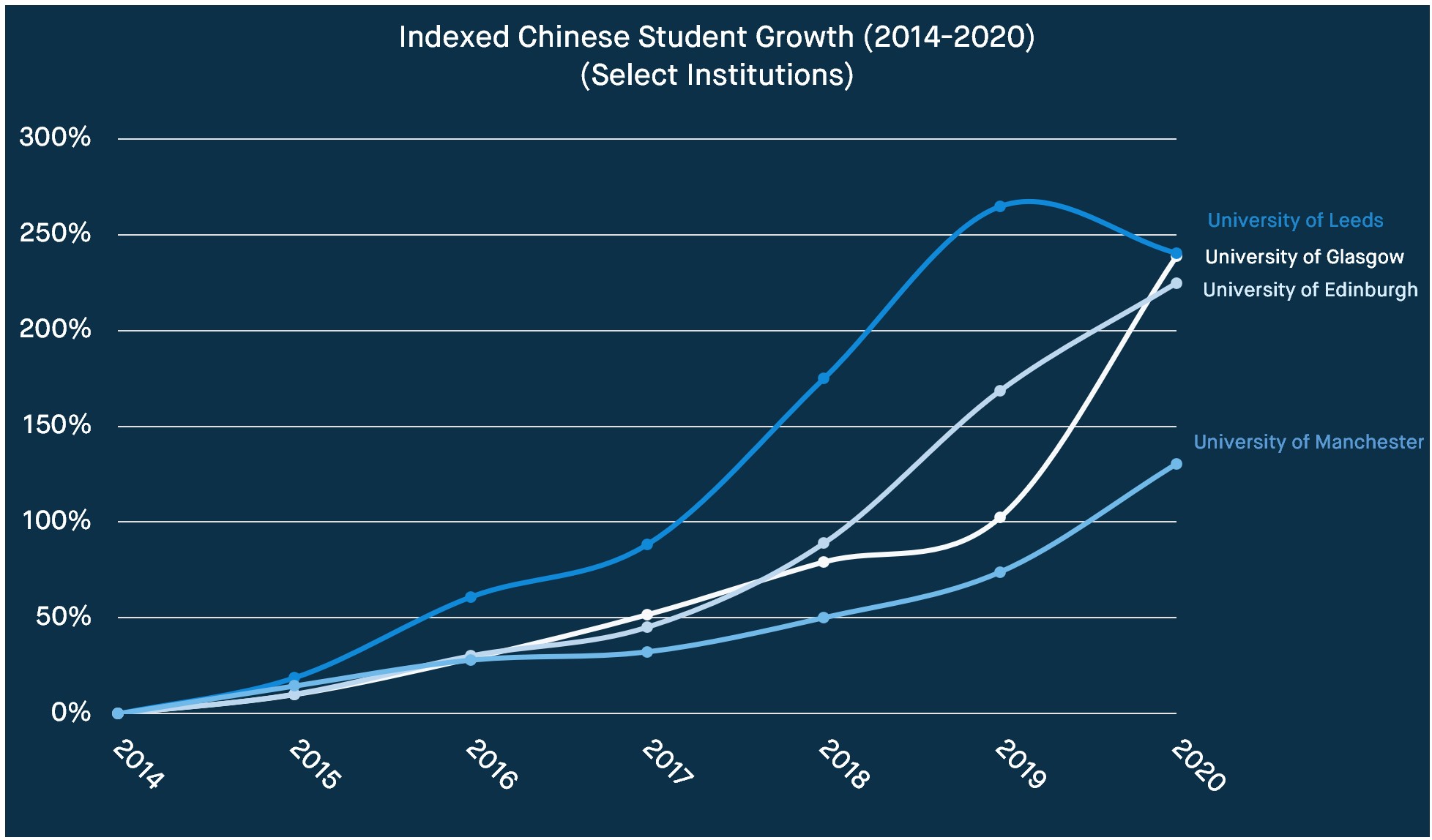 Despite the UK reporting an overall increase in Chinese internationals, this was not the case across all UK institutions. Figure 3 below details 10 universities (excluding London) that reported year-on-year declines.

Cardiff Metropolitan University reported the largest decrease YoY at 63.8%, albeit that only represented 220 fewer students.

In terms of absolute decreases, YoY the University of Liverpool saw the greatest reduction, with the total number of Chinese students falling by 1,780 to 4,250. Longer-term, growth at the university has been relatively flat, with Chinese students increasing by just 80 since 2014.

The University of Leicester also recorded a significant decrease YoY, with 790 fewer students.

Loughborough University, the University of Nottingham, Cardiff University and University of Southampton also recorded YoY decreases, however these institutions all appear to have benefitted from Chinese internationals long-term. They have recorded increases of 33%, 80%, 68% and 49% respectively since 2014. 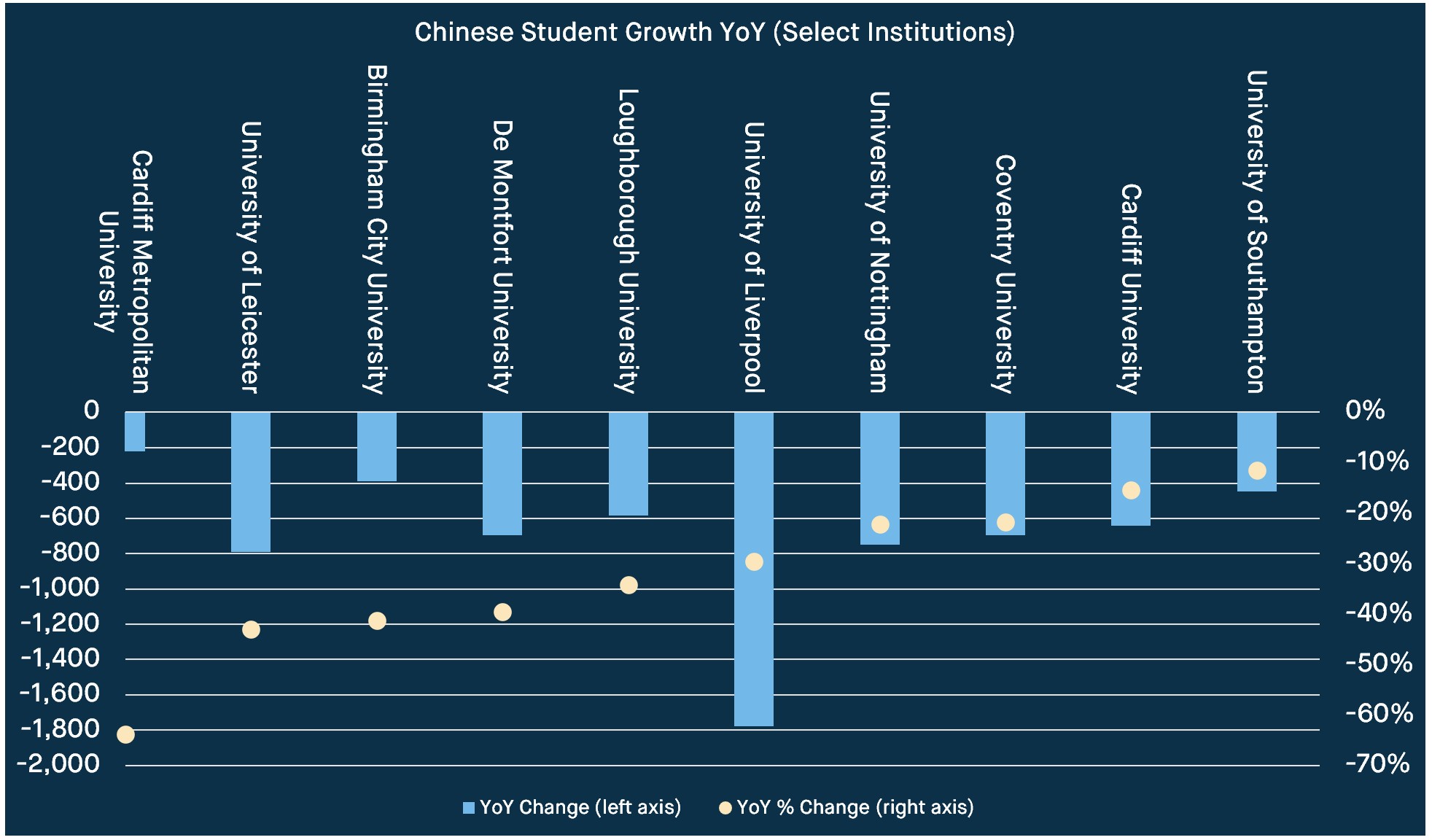 Looking over a longer time frame, a number of universities have continued to struggle to attract Chinese internationals.

Sheffield Hallam in particular has reported a sharp fall of 75.0% since 2014, represented a loss of 1K students.

Cardiff Metropolitan also struggled to maintain Chinese student numbers, reporting a reduction of 73.7% since 2014, although this represented just 350 fewer students. 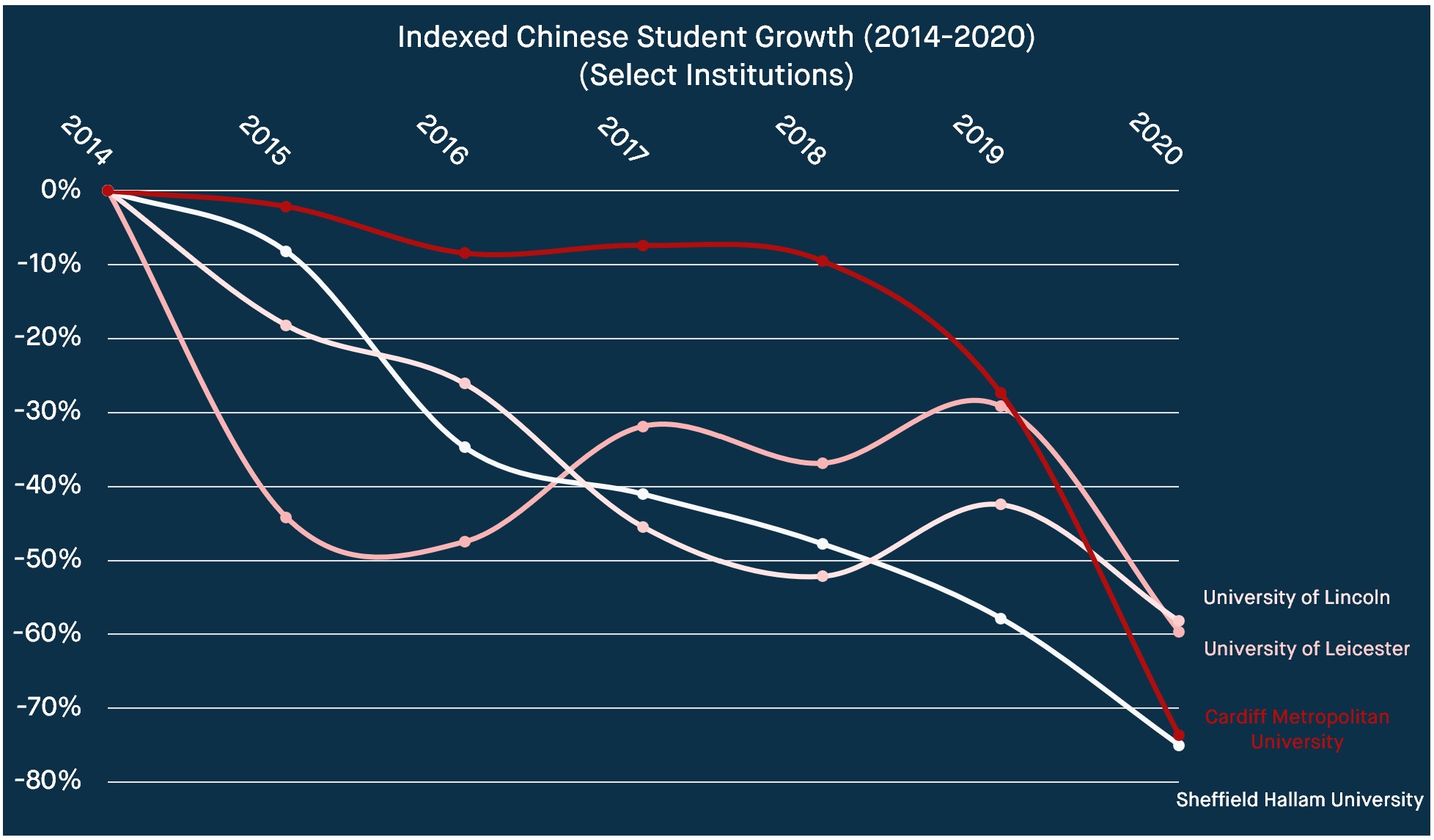 Chinese students are of particular importance to the PBSA sector, with many schemes unaffordable to a large proportion of domestic students. Given the national trend and growth in Chinese students, some investors may be surprised to see both short-term and long-term declines at certain universities. This again highlights the importance of understanding local market dynamics, which can vary significantly between locations.