Indian Student's Search Budgets: How do they compare?

Since the 2014-15 academic year, the number of full-time students studying in the UK from India rose by a staggering 386.1%, resulting in an additional 62.0K students.

For more insight into the recent growth please see our news post here.

With this significant increase in mind, the StuRents research team has conducted an analysis of the activity of Indian students on the platform, revealing insights into both budgets and property size preferences. This data can help users better understand the search behaviour of Indian students.

The first comparison looks at the prices of properties viewed by Indian students relative to both domestic and South-East (SE) Asian students to reveal interesting behavioural insights. For the purpose of this analysis, we have grouped searches by students from Singapore, China, Hong Kong and South Korea and defined this as SE Asia.

The most popular price point viewed by Indian students on the platform was just £90pppw, which equated to 9.9% of all properties viewed. Conversely, the most commonly viewed property for SE Asian domiciled students was priced much higher, at £160pppw, albeit the percentage of these views was lower, at 7.6%.

Excluding the London market, where the price of student accommodation possesses a greater average weekly rent than the national average, there is a clear difference between the price of properties being viewed by UK students depending on whether they are HMOs or PBSA.

The most popular price point of HMO properties being viewed was £120pppw. Additionally, Figure 2 shows a rapid decline in demand beyond this price point, with views of HMOs priced at £150pppw or below equating to over 91% of all views on StuRents.com.

Looking at PBSA views, the distribution is much more evenly spread. Whilst the most popular price point was only slightly higher than the HMO market, at £130pppw, a considerable share of students were looking at higher-priced accommodation. For example, almost 16% of views were priced at £200pppw or more, compared to just 1.7% for HMOs.

The weighted average price of HMOs being viewed by UK students was recorded at £120pppw, whilst for PBSA this figure stood at £150pppw. 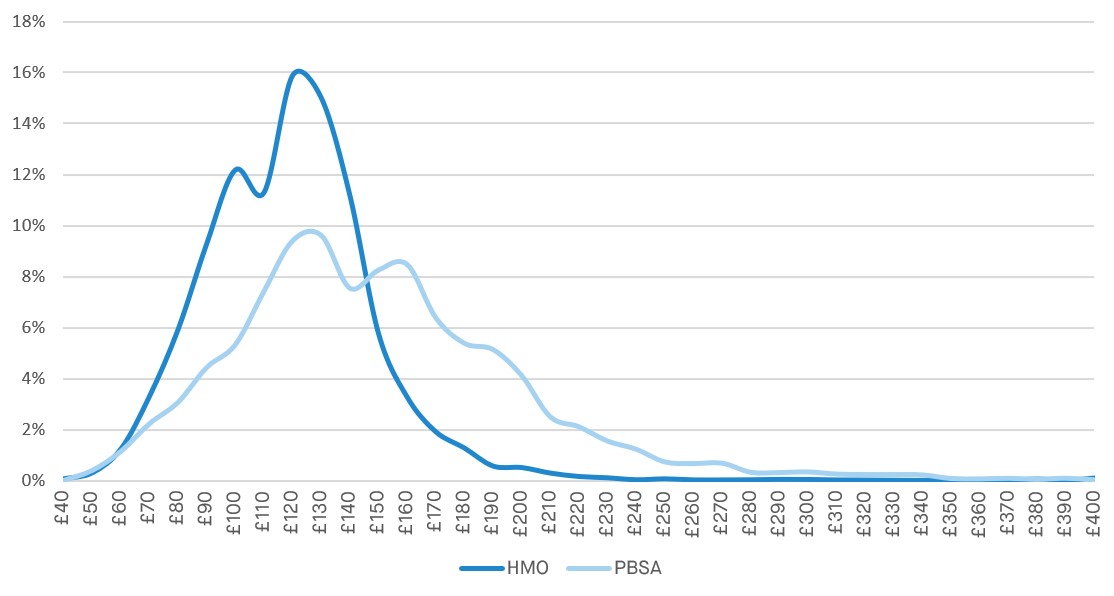 The market generally considers Indian domiciled students to share the same accommodation preferences as those from China and other South-East Asian countries. However, Figure 3 below highlights that whilst there is still a clear preference for 1-beds and studios, larger clusters are also relatively popular.

Property views for 1-beds and studios by Indian domiciled students made up 38.1% of the total views on StuRents.com. Whilst this is considerably lower when compared to the 61.8% share from other SE Asian domiciled students, it remains the most popular accommodation choice.

For clusters and HMOs containing 3 beds or more, the percentage share of views from Indian domiciled students is 53.0%. This is substantially higher than the figure of 36.1% associated with SE Asian domiciles.

Conversely, UK domiciled students have shown a much stronger preference for clusters and HMOs. The most popular choice of size for UK students was 4 beds, which equated to 20.1% of the total.