Following data released by UCAS covering applications made by the June 2022 deadline, StuRents has analysed the information to highlight the key trends. 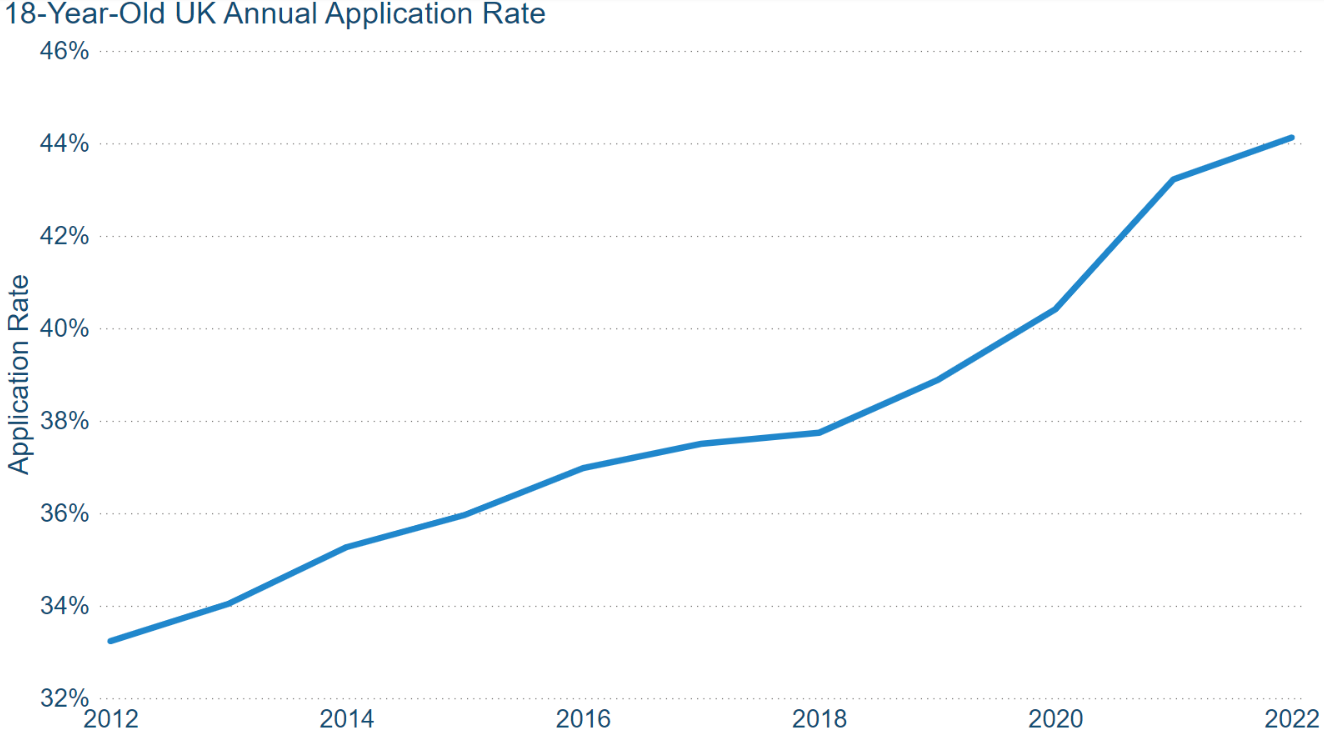 In 2022, the proportion of UK 18-year-olds applying to university hit a record high of 44.1%, up from 43.2% reported in the previous year. This equated to more than 325,000 18-year-old applicants. This will likely lead to a record number of students entering higher education institutions and requiring accommodation in the coming academic year. 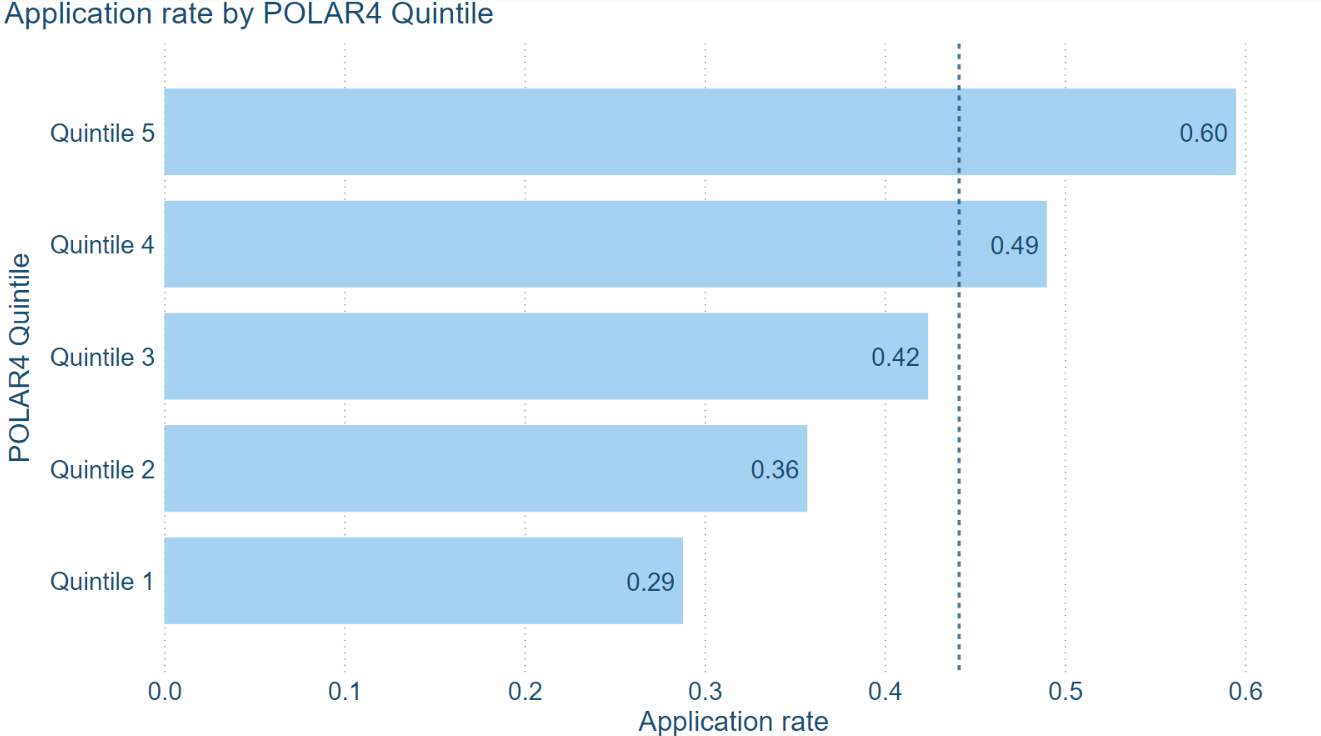 The chart above shows the 2022 application rates of 18-year-olds per POLAR4 quintiles. POLAR4 is used by UCAS to estimate how disadvantaged an area is, based on the geographical location of students and how many young people in the area typically go to university. Quintile 1 represents students from the 20% of areas with the lowest participation rates, the top 20% are Quintile 5 and everywhere else is somewhere in between.

The chart shows that Quintile 5 and Quintile 4 application rates are above the national average, and the other quintiles are below it. 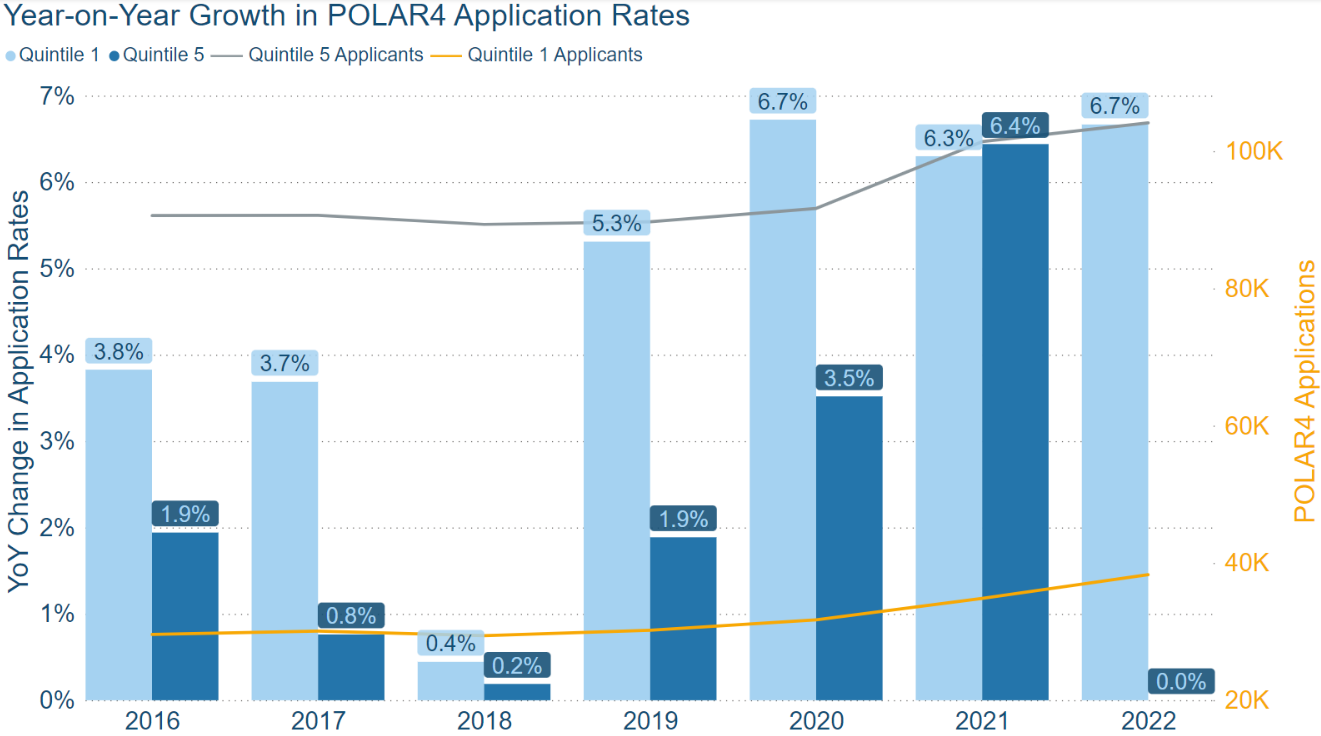 The chart above shows the year-on-year changes in application rates for POLAR4 Quintiles 1 and 5, as well as the total applications made in each year.

Whilst the application rate for applicants from Quintile 5 areas remained at 0.59 this year, there were an additional 2,740 applicants. 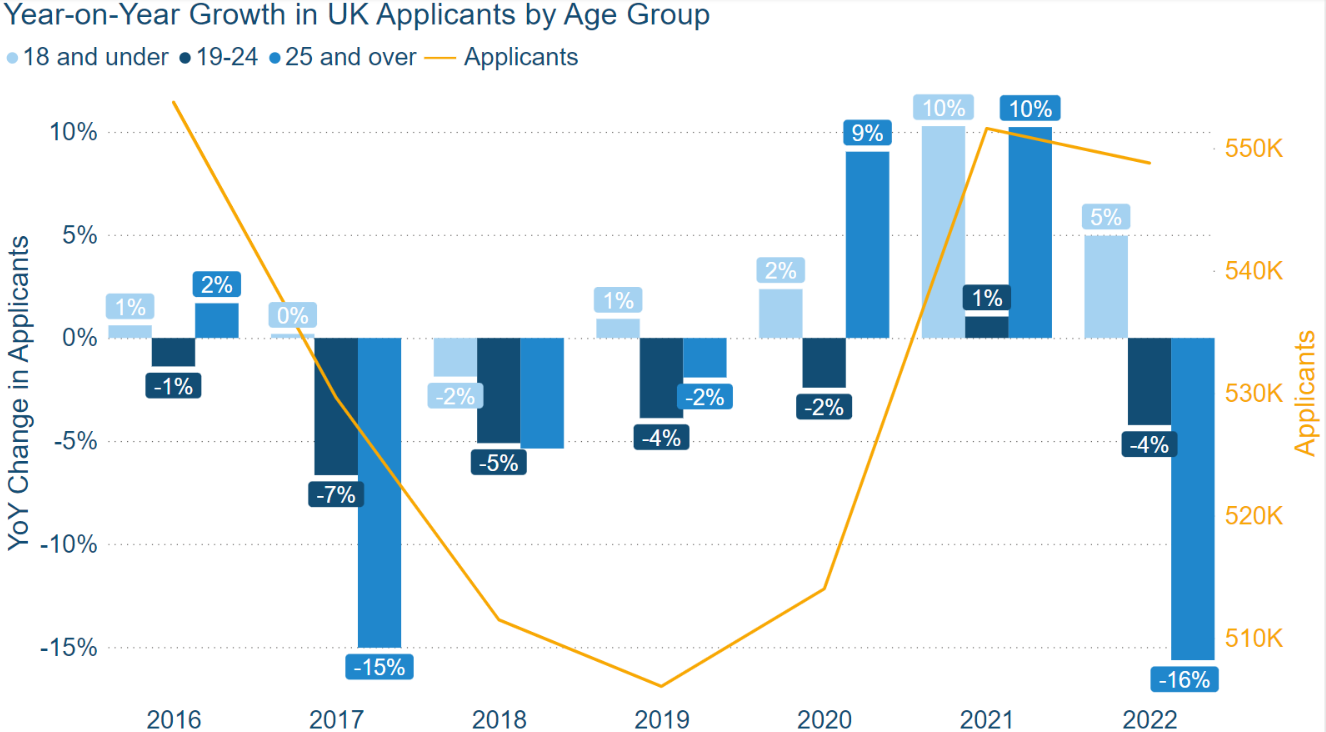 The chart shows that the total number of applicants from the UK dropped this year to 548,790, down from 551,630 (-2,840). The reduction can be attributed to a fall in the number of mature applicants, as the number of 18-year-old applicants increased by 5.0%.

Whilst the number of 25 and overs have fallen drastically this year, they are approximately equal to 2019 levels. There is a possibility that numbers for this group were inflated over the last few years due to the effects of covid-19 and the challenges this created in the job market, leading more to apply to university. 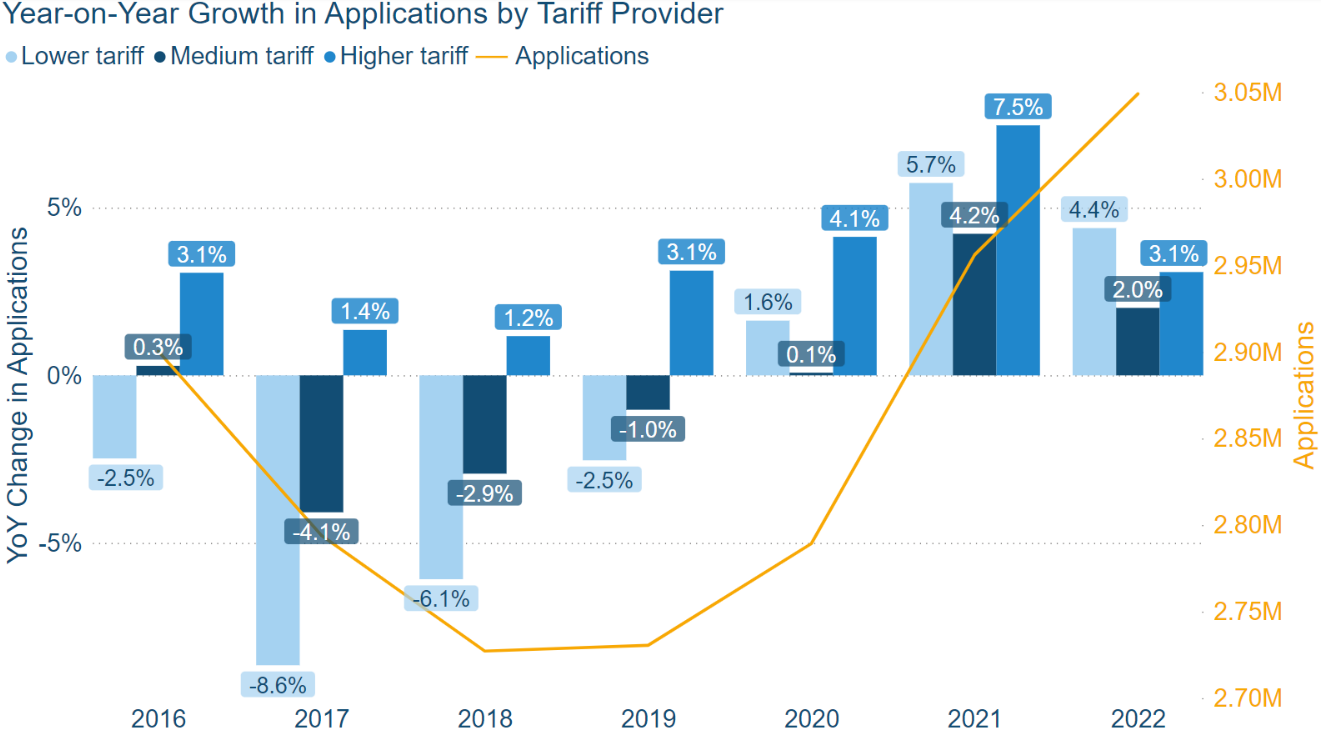 The chart above shows the year-on-year changes in applications per tariff group and the total number of annual applications. Tariff groups are defined by UCAS and are based on the average levels of attainment of a provider's accepted applicants.

The chart shows that whilst there was positive growth in all provider tariff groups this year, the rate of growth has fallen across the board. 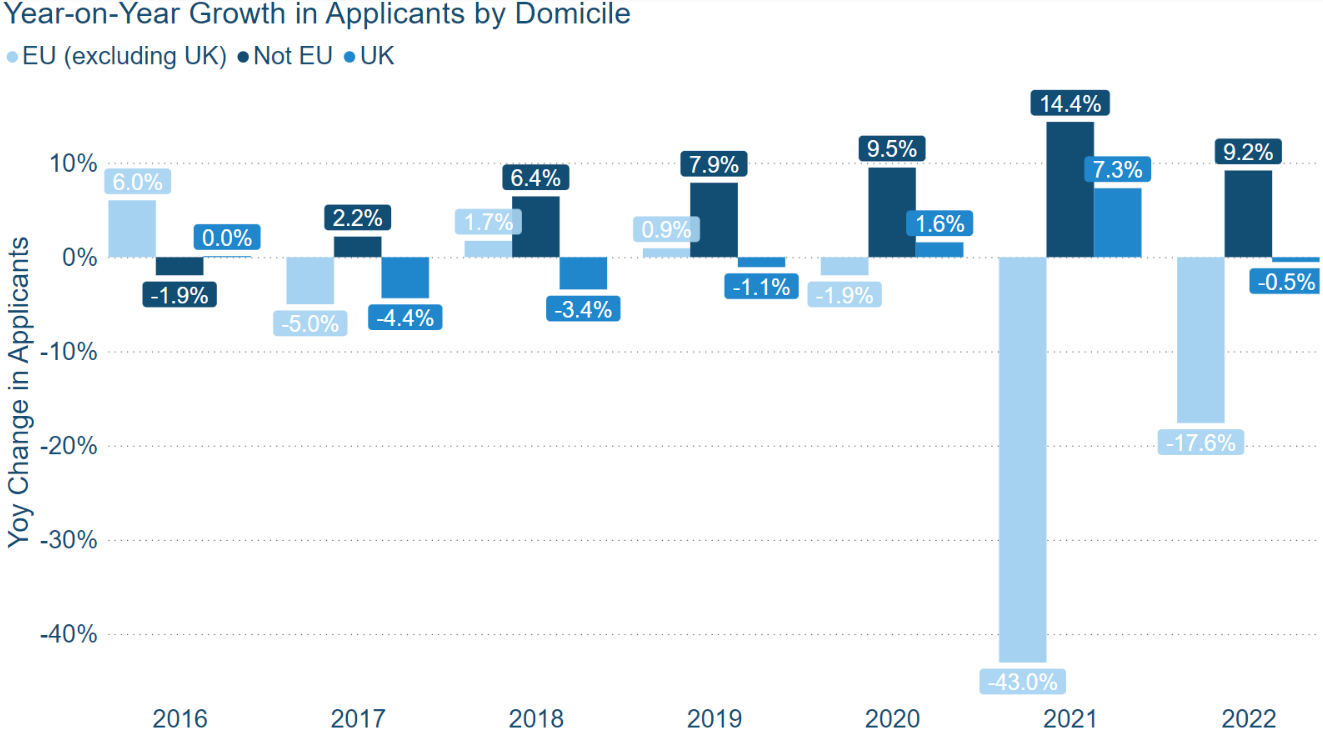 The chart above shows the year-on-year changes to UK, EU, and non-EU applicants.

The chart shows that the number of applicants from outside the EU has continued to increase year-on-year, for the sixth consecutive year; however the rate of increase slowed this year. In 2022, 111,770 applicants from non-EU countries were reported, 9.19% more than in 2021.

That chart also shows that applicants from the EU fell, but the year-on-year reduction is much lower than that of last year, 17.61% as opposed to 43.02%. The total number of applicants from the EU now stands at 23,160, less than half of the 2020 figure. Brexit and the loss of home fee status for EU students is the major contributing factor to this reduction.

The number of UK applicants fell by 0.52%, due to the fall in mature students, as shown in the previous chart. 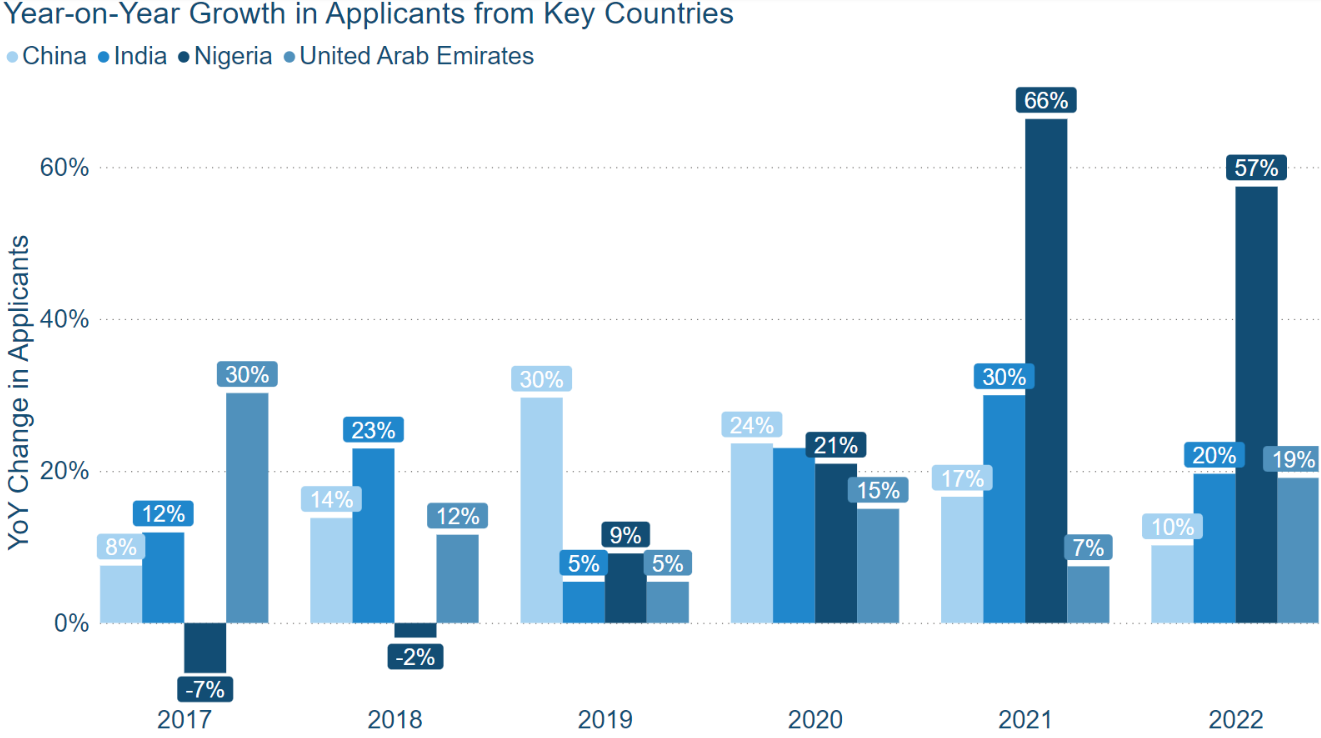 The chart above shows the year-on-year changes in applicants from some select countries of interest: China, India, Nigeria, and the United Arab Emirates.

The number of applicants from Nigeria increased significantly this year, rising by 57% to 5,290. This year's figures are 216.77% higher than those of 2016, and represent the fourth consecutive year of growth.

The number of applicants from India has been increasing consistently since 2006, and this year grew by 19.64% (+1,950 applicants).

This week, India and the UK signed the Memorandum of Understanding (MoU) officially recognising each other's higher education qualifications. The agreement will likely attract more Indian students to the UK, so we can expect to see the number of applicants increasing even further in the coming years.

The United Arab Emirates also reported one of the highest year-on-year increases in applicants, with numbers jumping by 19.10%. This represents the biggest year-on-year percentage increase reported by the country since 2017.

Clare Marchant, Chief Executive of UCAS, commented on the data: "Over the next few weeks, we'll see a huge effort across the education sector to support more than 700,000 students begin the next chapter in their educational journey and we believe that record numbers of students will get their firm choice this year on results days."

The latest data is broadly positive for the sector and reflects the continued attraction of UK higher education. Looking ahead, as the 18-year-old population grows further, demand for student accommodation is likely to go from strength to strength.

No Guarantee of University Halls for Glasgow Students