Following JCQ and SQA results days, UCAS have released statistics around the number of accepted applicants and their route of entry. This data has revealed some interesting insights on the students who will be starting at UK universities in September 2022.

Note: Whilst UCAS continue to release daily data updates, numbers in this post are reflective of the data release 6 days after JCQ results day (24/08/2022) 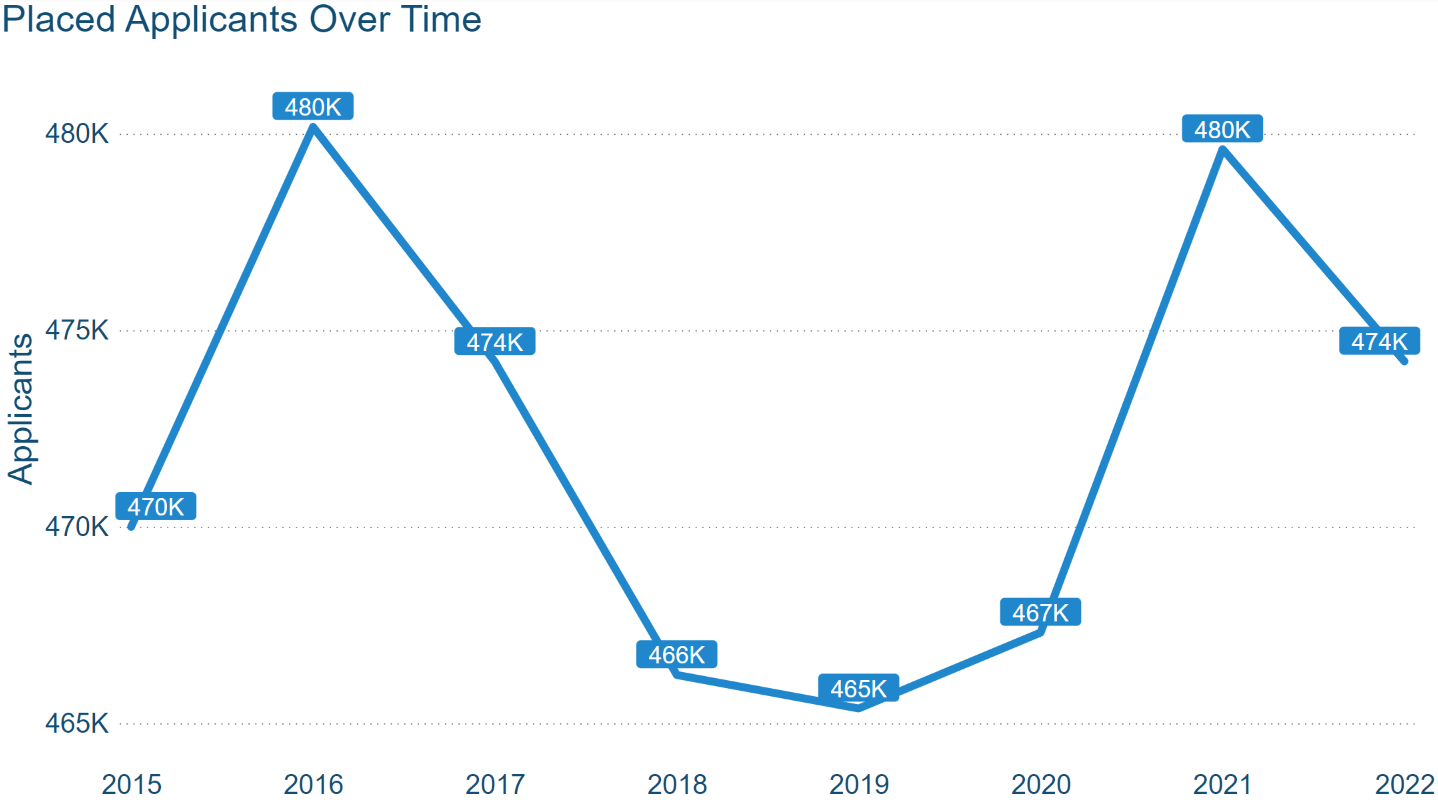 The chart above shows the number of applicants with a 'placed' status since 2015.

The chart shows that 474,000 students have been offered places at UK universities this year via UCAS, down 1.1% from last year. However, whilst numbers are down year-on-year, the current figures are higher than pre-covid levels; the 2022 value is up by 1.9% compared to 2019. 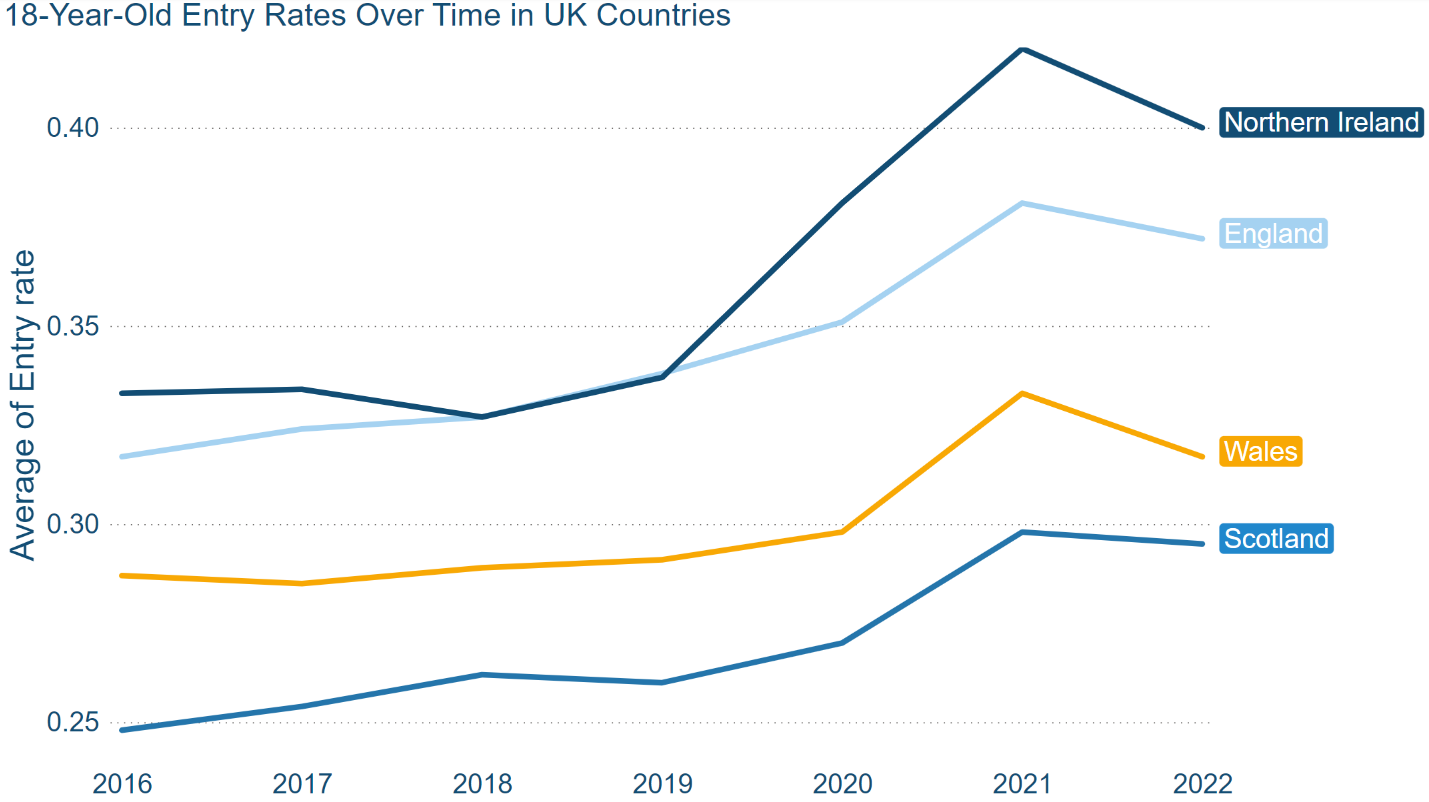 That chart above shows the entry rates of 18-year-olds in each of the countries of the UK since 2016.

The chart above shows the 2022 statuses of placed applicants according to UCAS.

According to the data, over 387,000 students (81.7%) were placed at their firm choice university. This includes conditional and unconditional offers which the applicant confirmed as their first choice following an offer from the institution.

An additional 35,000 students (7.5%) were placed through clearing. 30,000 students (6.3%) have been placed at an institution which they confirmed as their second choice following an offer.

Many universities only offer guaranteed university accommodation to students who confirmed the institution as their first choice, and open accommodation selection prior to results days. This leaves some students scrambling to find appropriate accommodation after they have received their results, many of whom may have to rely on private student housing. 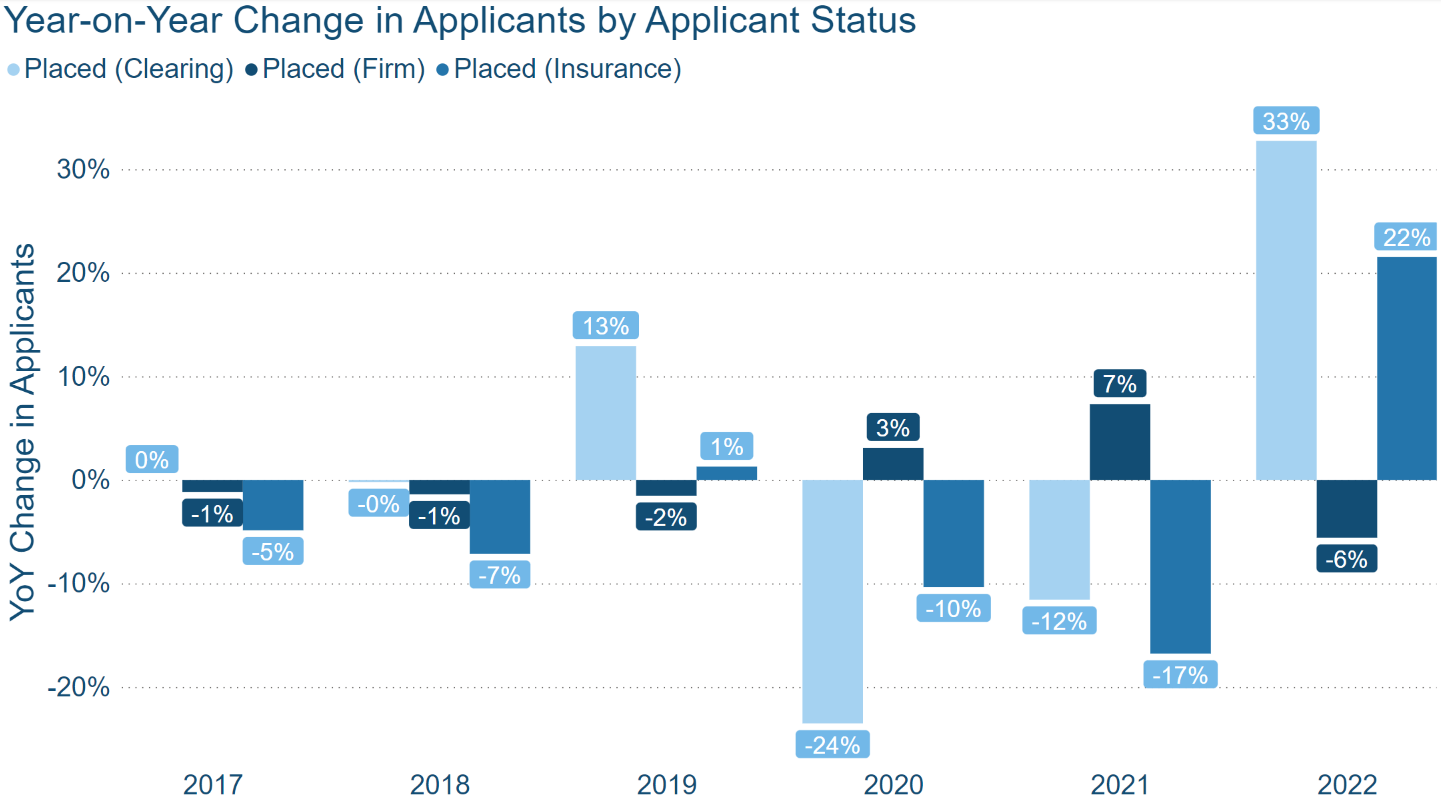 The chart above shows how the number of placed applicants have changed year-on-year according to their applicant status.

The chart shows that the number of students placed at their firm choice university is down by 5.6% year-on-year. This is due to students not achieving the conditional grade requirements for their first choice university. In recognition of the disruptions faced by pupils as a result of covid, greater leniency was given in A-level marks this year, and grade boundaries were more generous. However, it is likely that more students failed to reach their expected grades than those of the previous few years, whose grades were teacher-assessed.

Meanwhile, there has been a 32.7% increase in students placed through clearing, the first year-on-year increase in this category since pre-covid. Similarly, the number of students placed at their insurance universities is up 21.5%, following two years of decline.

These figures show that the number of first-year students who do not have accommodation guaranteed is likely to be growing. As we move into the future, and grade boundaries are returned to normal levels, we can expect to see these numbers continue to rise. Many of these students will look at private PBSA if they are unable to get placed in university provided halls, as it has a similar sense of community, and is able to provide a level of convenience that is attractive to young adults moving away from home for the first time, e.g. by having all-inclusive bills. 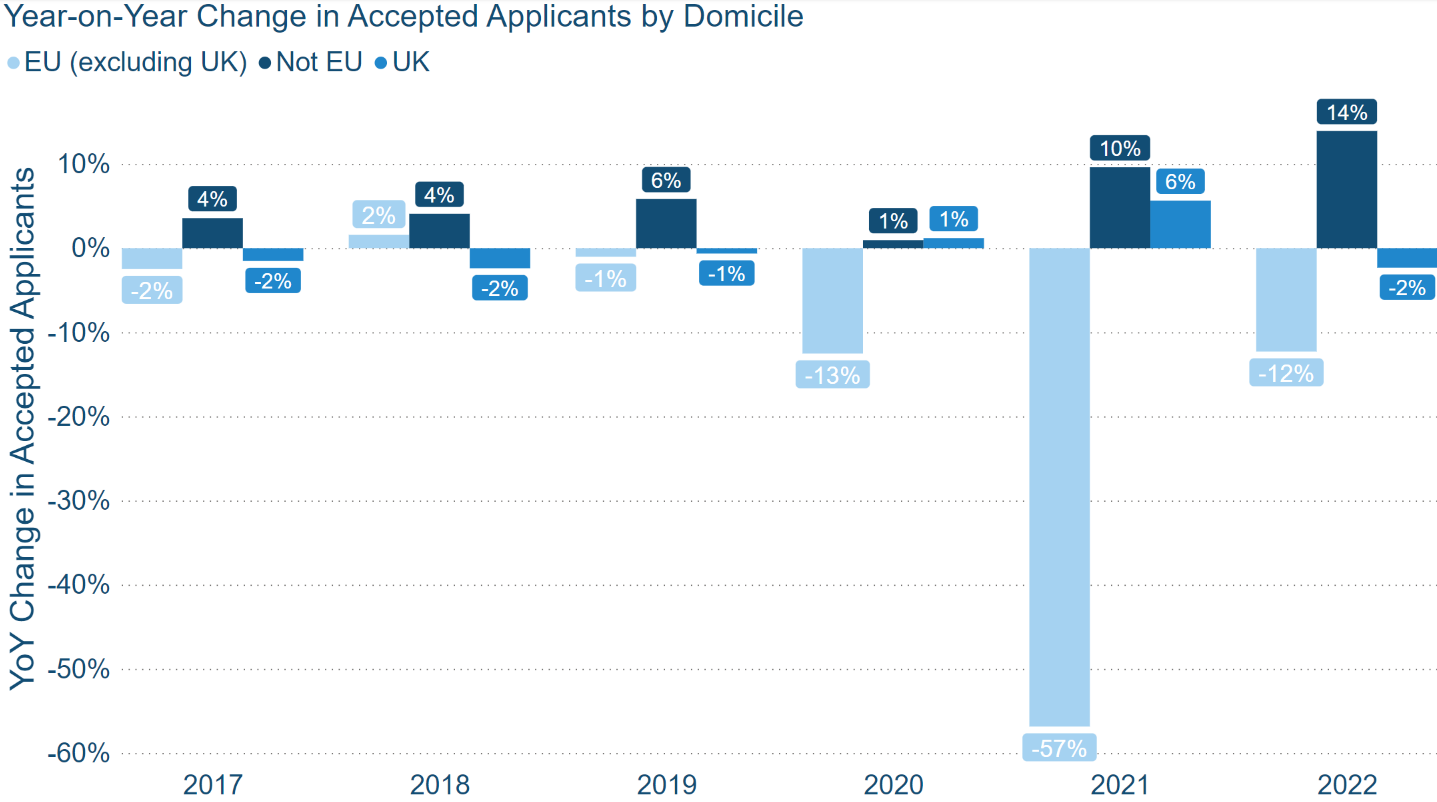 The chart above shows how the number of accepted applicants from different domiciles have changed year-on-year since 2017.

The chart shows that the number of acceptances for applicants coming from outside the EU has continued to grow by 13.9% year-on-year, now standing at over 47,000 students.

Meanwhile, EU acceptances continued to fall by 12.3% year-on-year. Whilst this represents the fourth consecutive year-on-year decline, this is a significantly smaller fall than the 56.9% reported last year. The reduction in EU students interested in coming to the UK is a direct result of Brexit and the loss of home fee status for EU students choosing to study in the UK. 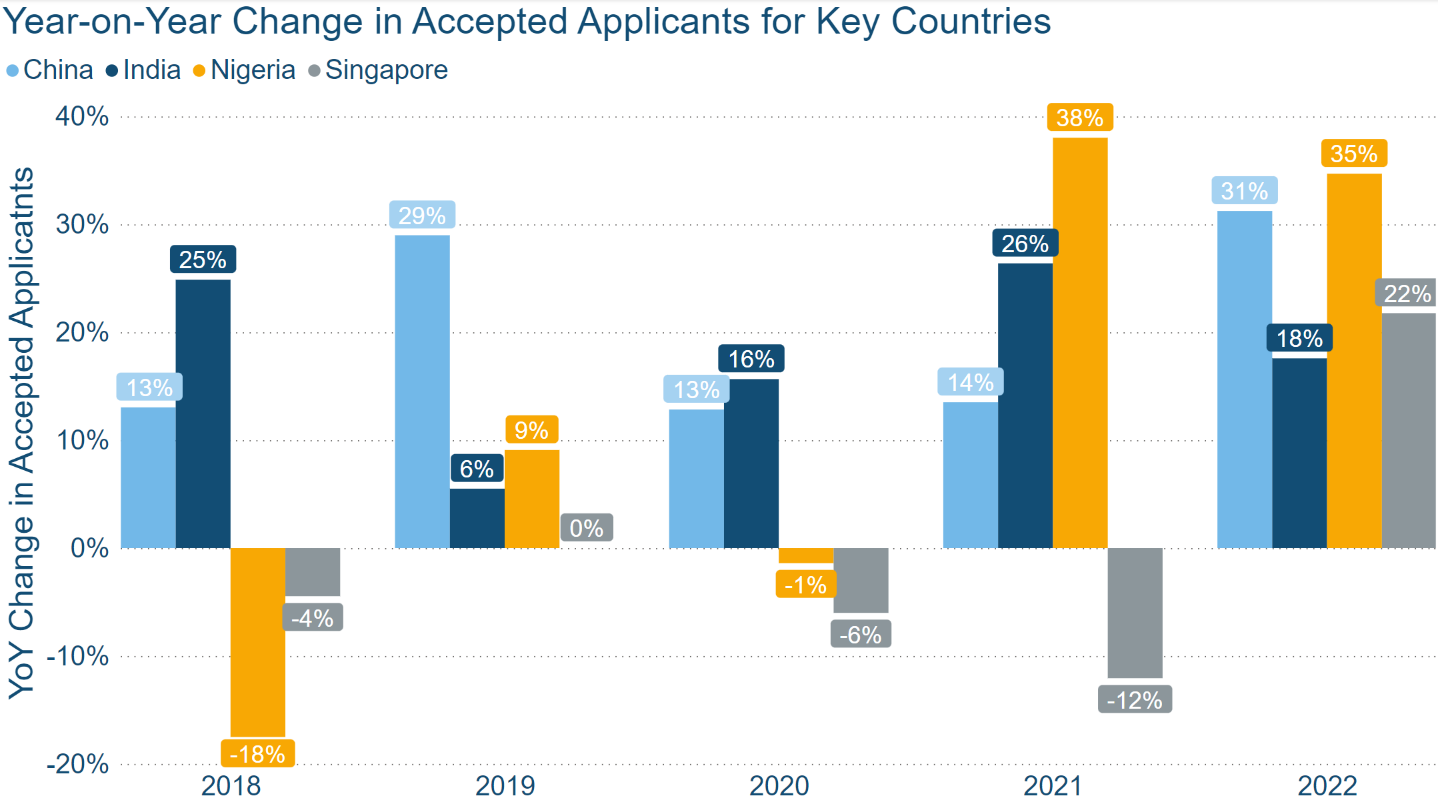 That chart above shows the year-on-year changes in accepted applicants from some key countries since 2018.

The chart shows that the number of applicants accepted from China (excluding Hong Kong) has continued to increase by 31.2% year-on-year, to nearly 15,000 students. Previous research has shown that students coming from China are particularly likely to choose private PBSA accommodation.

Students from India have been of particular interest in recent years as they now represent the second highest number of international students coming to the UK, after those coming from China. The data shows that this is unlikely to change as numbers continue to increase, this year by 17.6%. The Memorandum of Understanding (MoU) signed by India and the UK in June is likely to ensure Indian students continue to choose to come to the UK for their studies.

There has been significant growth reported in students coming from Nigeria, this year an increase of 34.7% was reported, following on from a rise of 38.0% in 2021.

The number of acceptances of applicants from Singapore has increased this year by 21.8%, the first year-on-year increase reported since 2014.

The latest data is broadly positive for the PBSA sector. Whilst the overall number of placed applicants is down year-on-year, this is offset by the increase in successful applicants coming from outside the EU, who are likely to be drawn to high-quality PBSA accommodation.

The entry rate of 18-year-olds in the UK is trending upwards, and this, combined with the growing size of the 18-year-old population, will lead to a rise in domestic students in the coming years. The increased number of students not achieving places at their first choice university may also lead to a rise in domestic first-year students looking at private PBSA accommodations, due to a lack of available university accommodation. However, with rising international demand, competition between students is likely to increase.