A total of 15,523 purpose-built student accommodation (PBSA) beds have now been added to the market in time for the 2022-23 academic year. In terms of those delivered, 78.3% of the new beds are from private PBSA providers, with the remaining stock managed by universities.

This represents a year-on-year reduction of 28.9% compared to the 21.8K beds added in the previous year, and a reduction of 57.6% from the peak recorded in 2019. This also marks the third consecutive year where the pace of growth has declined, reflecting the slowdown in planning activity and the challenges the industry has faced due to Brexit, COVID and the rising costs of construction.

Since 2017, a total of 160k beds have been delivered, representing an average per year of approximately 26.7K, with an average of 21.3K being managed by private PBSA operators. In comparison, the latest HESA data suggests the number of full-time students in the UK has been increasing at a faster pace, with an average of 76.3k students added per year between 2017-2020, indicating there could be tightening in supply, albeit this will vary per location. The average number of full-time, non-UK domiciled students has increased by 30.9K each year between 2017-18 and 2020-21 (the latest available HESA data). 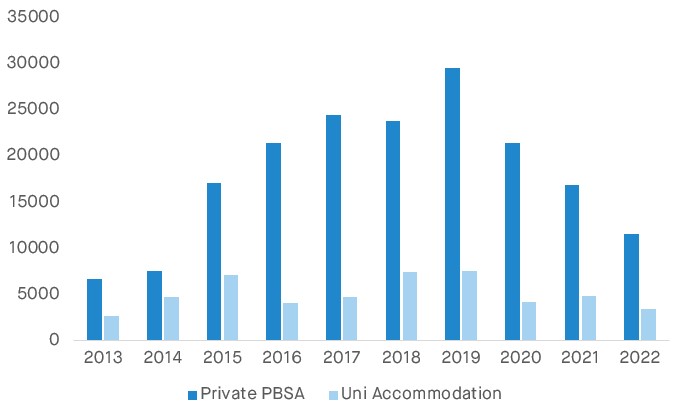 Despite the reduction in the pace of growth in PBSA beds this year, the proportion that are managed by private operators has continued to increase, reaching 52.9%. The number of privately owned PBSA beds has been steadily increasing since 2013 and started to provide the majority of beds in 2019. 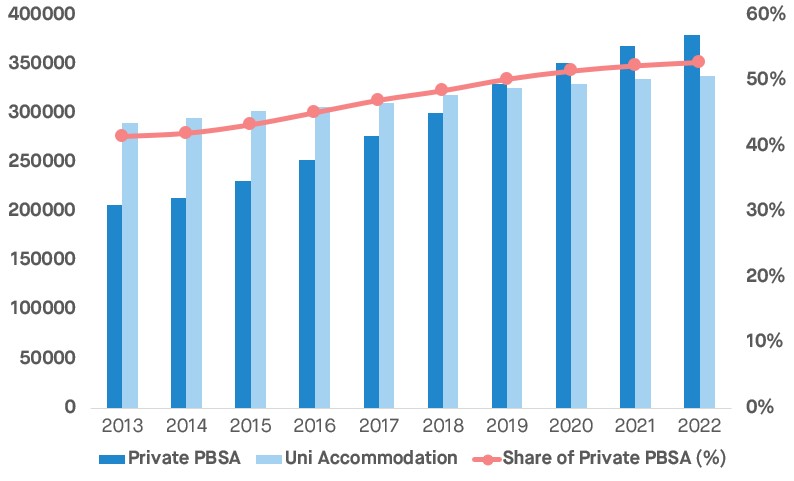 The location with the greatest number of new beds is York at 1,873, representing an increase of 18.7% year-on-year. In terms of percentage growth, this was one of the highest increases recorded by any city this year, beaten only by Swansea (19.2%). This follows a period of relative inactivity for York, with no beds delivered in 2021, and just 98 in 2020.

Almost 80% of the new PBSA beds in York are attributable to the opening of two new residences at the University of York's East Campus. Anne Lister College and David Kato College will house almost 1,400 additional students at the university. Also new for September 2022 is Frederick House, which is situated within a short walk from the University of York and the city centre. With prices ranging from £139-£219pppw, the Student Roost scheme is already fully booked for the 2022-23 academic year.

After York, the city with the second highest increase was Leicester at 1,641 beds, an increase of 9.4%. Almost 1.2K of these units were due to the latest edition to the University of Leicester's City accommodation, Freemen's Common. This year, schemes from Mezzino, Study Inn and Novel Student also became live. 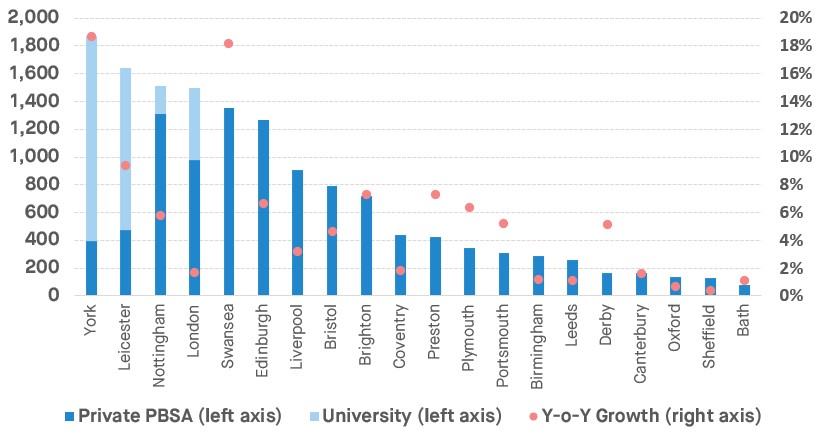 The graph below details the PBSA beds added to the market and the percentage of total beds added since 2017.

This was closely followed by London where beds have increased by 12.9K, albeit this only equated to an increase of 16.3%. 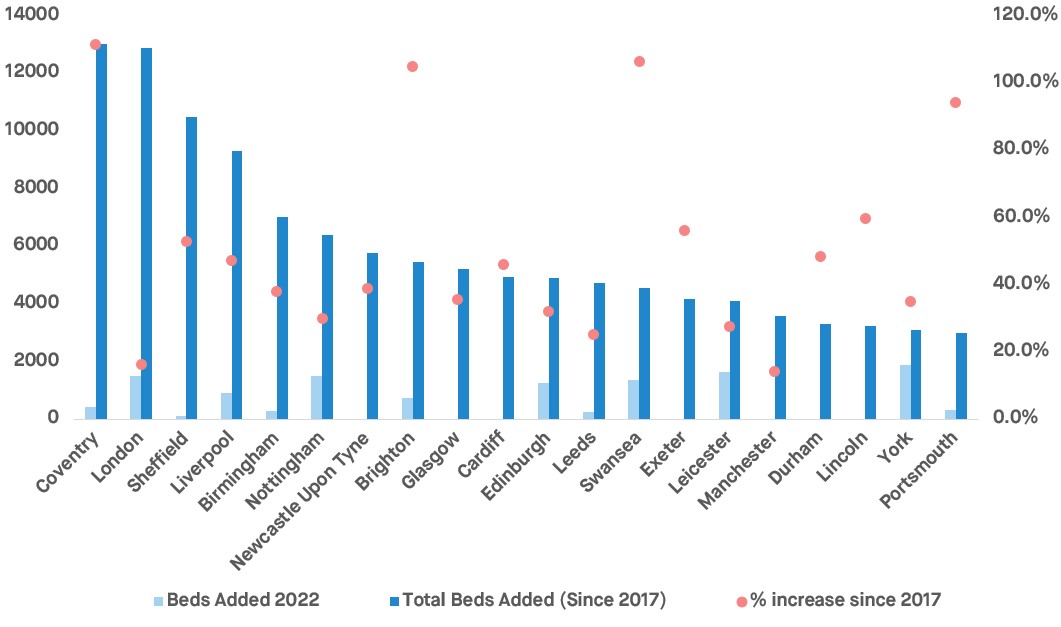 Whether these additional beds can be absorbed depends on local market supply and demand fundamentals. In the example of York, student numbers and hence the demand for beds has been steadily increasing in recent years. Assuming the supply of HMO beds has remained unchanged since 2017, StuRents estimates the demand for beds in the city has risen by ~34%. If we also assume the market was in balance in 2017, the supply of PBSA beds could increase by a further 20.9% before the fundamentals of 2017 are restored.

Looking ahead, with planning application activity at historically low levels, it is unlikely that growth in supply will be able to keep up with increases in demand. However, it is worth bearing in mind that each university town and city is different and industry stakeholders should be wary of locations where supply has outstripped demand growth or vice versa.