The latest data released by the government regarding issued visas means we now have numbers encompassing the entirety of the 2021/22 academic year. This data has revealed some interesting insights, including the continued rise in international demand. 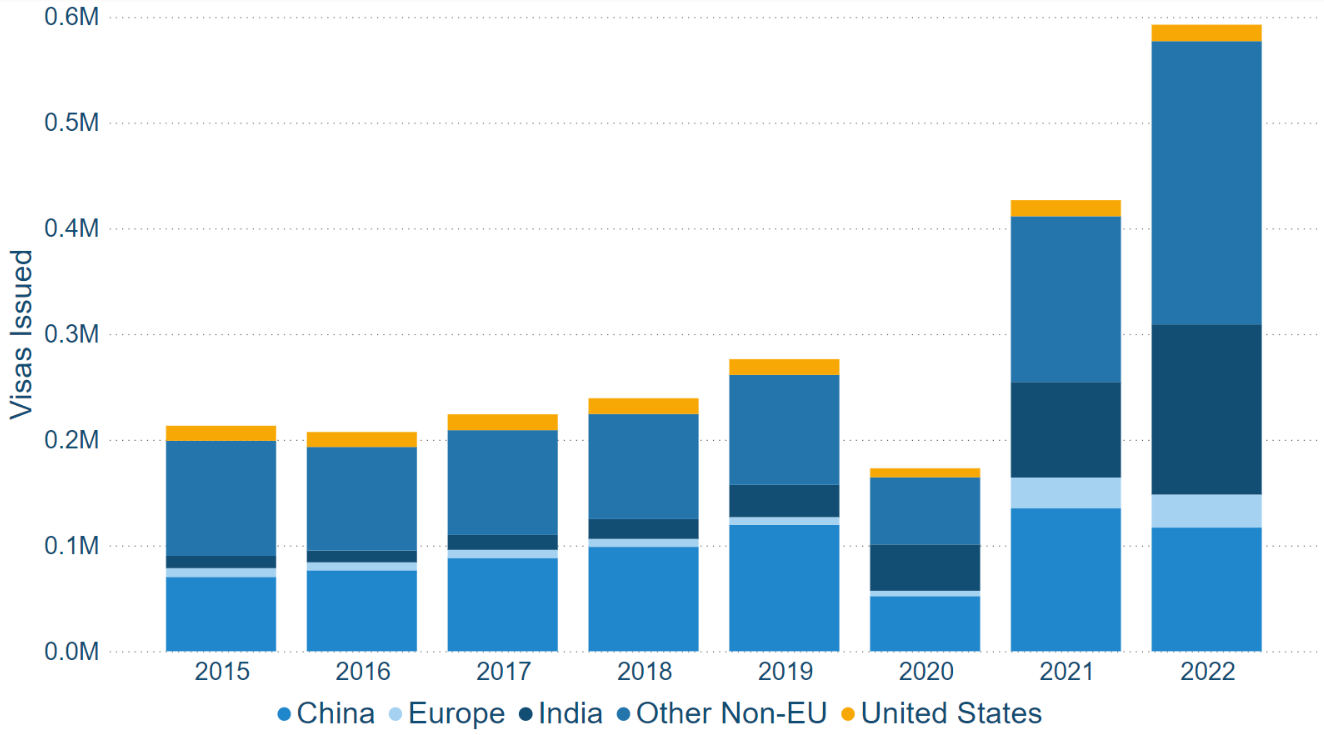 The chart above shows the distribution of visas issued across key markets between the 2015 and 2022 academic years (Oct-Sep).

As we can see from the chart, with the exclusion of a fall in 2020 due to COVID, the number of visas being issued to international students has been rising consistently. There was also a considerable jump in the most recent academic year (+38.9%). The total number of visas issued has risen by 177.8% since 2014/15.

The data shows that, whilst the number of students from China has increased by 66.4%, due to the significant rise in other key markets, the proportion of visas being issued to Chinese students has fallen from 33.0% to 19.7%.

The most significant increase has been in those issued to Indian students. Between 2015 and 2022 the number of visas being granted to students from India increased by a massive 1282.2%, albeit this increase was from a comparatively low base. This means that the proportion of visas being granted to these students grew from just 5.5%, to be the biggest of any individual country at 27.2%. This is the first year that the country with the most issued visas was not China, which made up 31.7% of visas last year, compared to India's 21.2%.

This shift in the makeup of international students is likely to have a knock-on effect on the type of accommodation that will be demanded. Previous evidence suggests that Indian students tend to have a lower budget for accommodation than their counterparts from the Far East. They are also more likely to be seeking cluster-style accommodation over studio rooms. Whilst the number of students coming from China remains consistently high, demand for existing 'pricier' PBSA will remain; however, additional PBSA at possibly lower price points will be required to cater for the influx of students from different backgrounds.

In terms of numbers, there has been a not insignificant increase of 276.8% (+22,969) in visas issued to European students. This can be attributed to Brexit and the requirement for students from additional European countries to obtain visas in order to come to the UK to study. The number of students from the US has remained relatively consistent, but the proportion relative to all visas has dropped due to the significant growth in other markets. 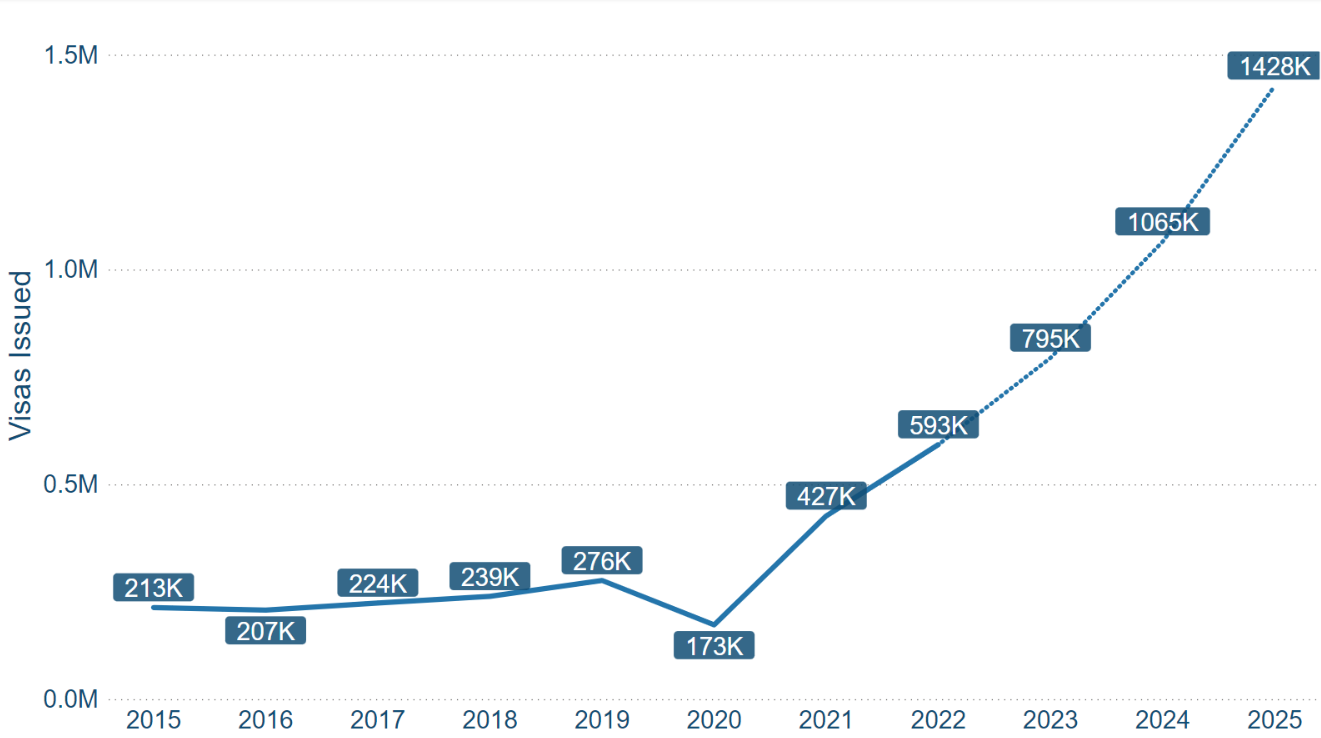 The chart above shows the total number of visas issued each year, projected forward for the next three years. The projection is based on the average year-on-year increase over the most recent five years. 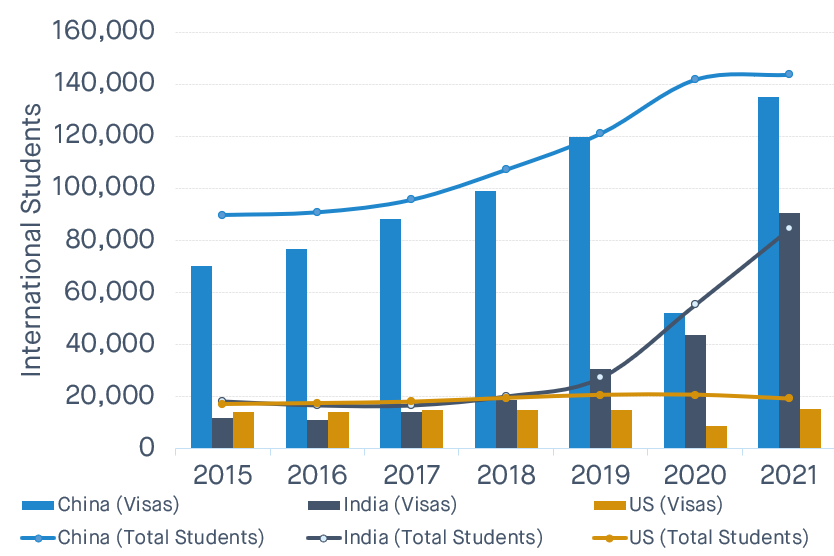 Further insight can be gained into international student numbers by investigating data provided by HESA. The chart above shows how the numbers of visas granted in key countries over time compare to the total number of students from those countries in attendance at UK universities according to HESA. 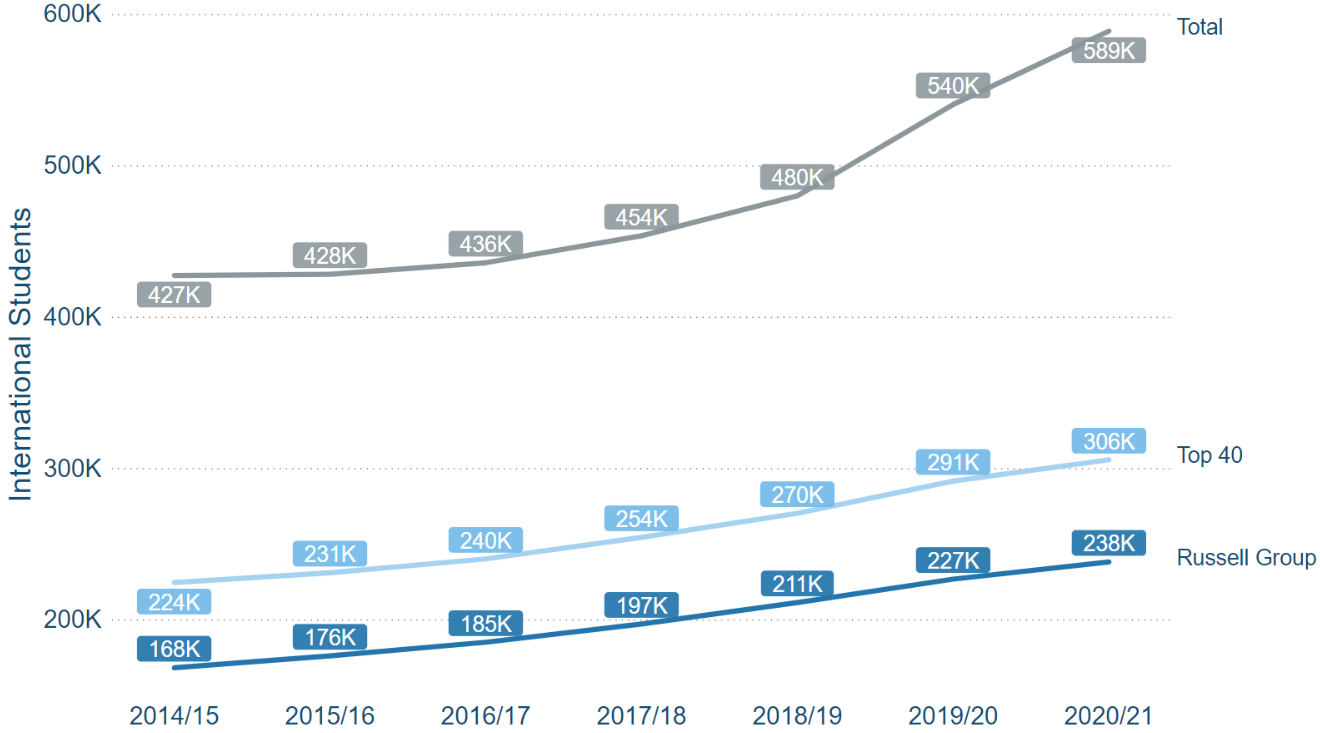 Prime Minister Rishi Sunak recently announced that the government is considering limiting the number of visas issued for 'low-quality' degrees. Whilst this has not been confirmed, and there has been no indication given as to how they would quantify which degrees would qualify as 'low-quality', we can use the universities ranked in the top 40 of The Times and Sunday Times Good University Guide as an indicator. As a further extreme, we can consider the effect of visas being limited to only the 24 Russell Group universities.

The chart above shows what effect this might have on the total number of visas being issued by showing how many international students are in attendance at all UK universities, as well as how many are attending Russell Group or Top 40 universities.

The data shows that in the 2020/21 academic year, 40.5% of international students in the UK attended Russell Group universities, and 51.7% attended universities ranked in the top 40 of The Times and Sunday Times Good University Guide. These proportions have been relatively consistent over time, meaning that we can expect national trends to apply to the more specific groups. 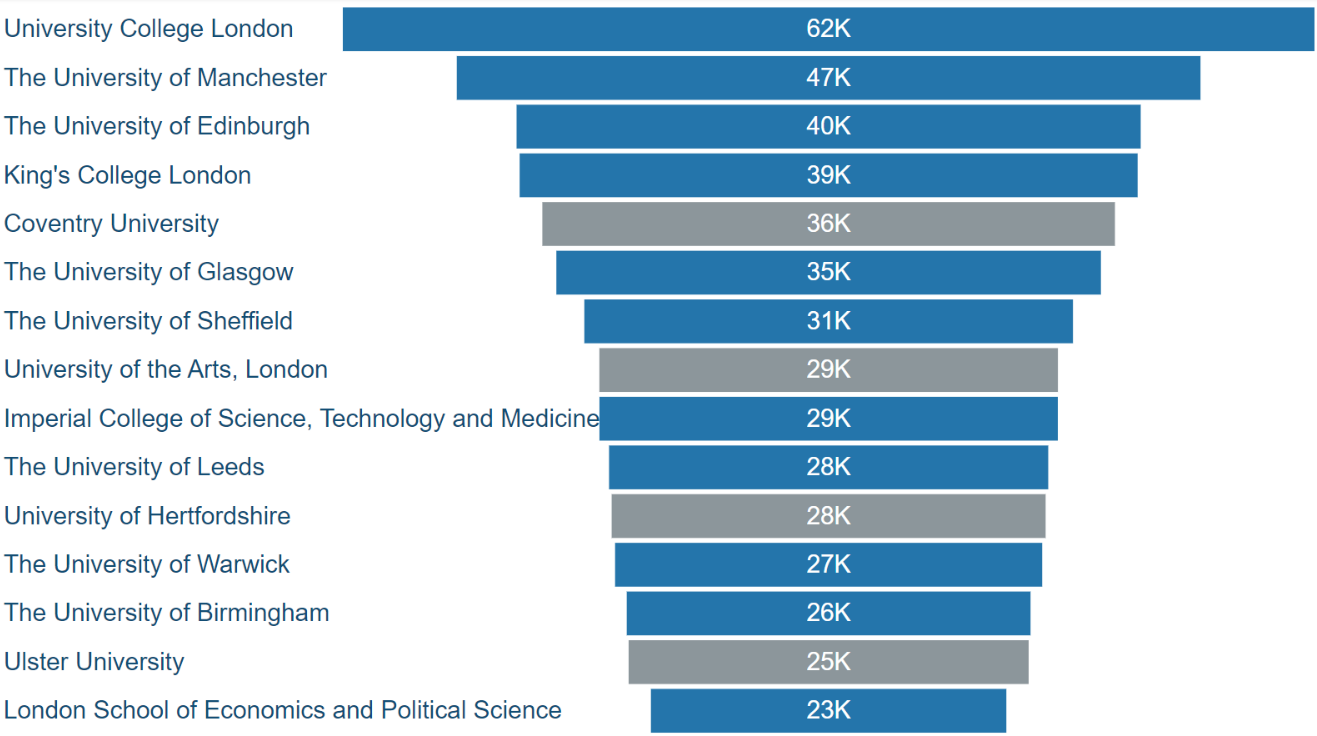 The chart above shows the universities that in the 2020/21 academic year had the highest numbers of international students in attendance, according to HESA. The chart has been coloured to show which of these universities are members of the Russell Group.

As shown in the chart, all but 4 of the top 15 universities in terms of international numbers are Russell Group institutions.

The latest data is broadly positive for the PBSA sector. Visa numbers are growing quickly, meaning we can expect the number of international students coming to the UK and seeking out PBSA accommodation to continue to increase.

However, the data also shows that the makeup of the international student body is changing dramatically, which could have implications for the demand profile of student accommodation. In particular, whilst the number of visas being granted to students from China remains high, they are making up a smaller proportion of visas being issued. This can be mostly accredited to the sudden jump in Indian student numbers. It is likely that new PBSA will need to be provided which aligns with the needs of this new demographic.

Finally, we are yet to see what policies, if any, will be employed by the current government regarding limiting the numbers of visas being issued to international students.