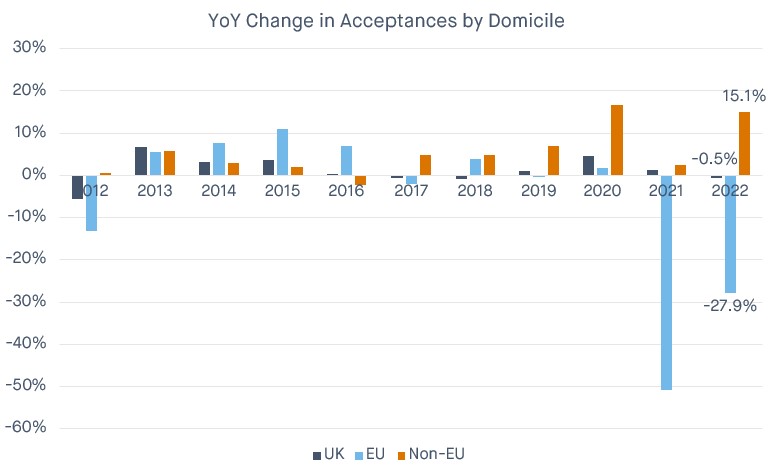 The chart above shows the year-on-year changes in acceptances by domicile, dating back to 2012.

The chart shows that whilst acceptances of UK students fell marginally by 0.5% (representing 2,650 fewer students), the year-on-year decline in EU student acceptances was much more drastic at 27.9%.

This is the second consecutive year of significant declines in EU numbers, with 2021 acceptances down by more than 50% from the previous year. This change is due to the significant fall in applicants coming from EU students which reduced by 41.2% in 2021 and a further 22.6% this year. Brexit and the loss of home fee status for EU students is the major contributing factor to this reduction.

The only domicile which showed positive year-on-year growth in 2022 was non-EU students, which jumped by 15.1%. A total of 62,455 acceptances have been made to nationals from countries outside of Europe this year. The chart shows that this is the sixth consecutive year of growth for this domicile. 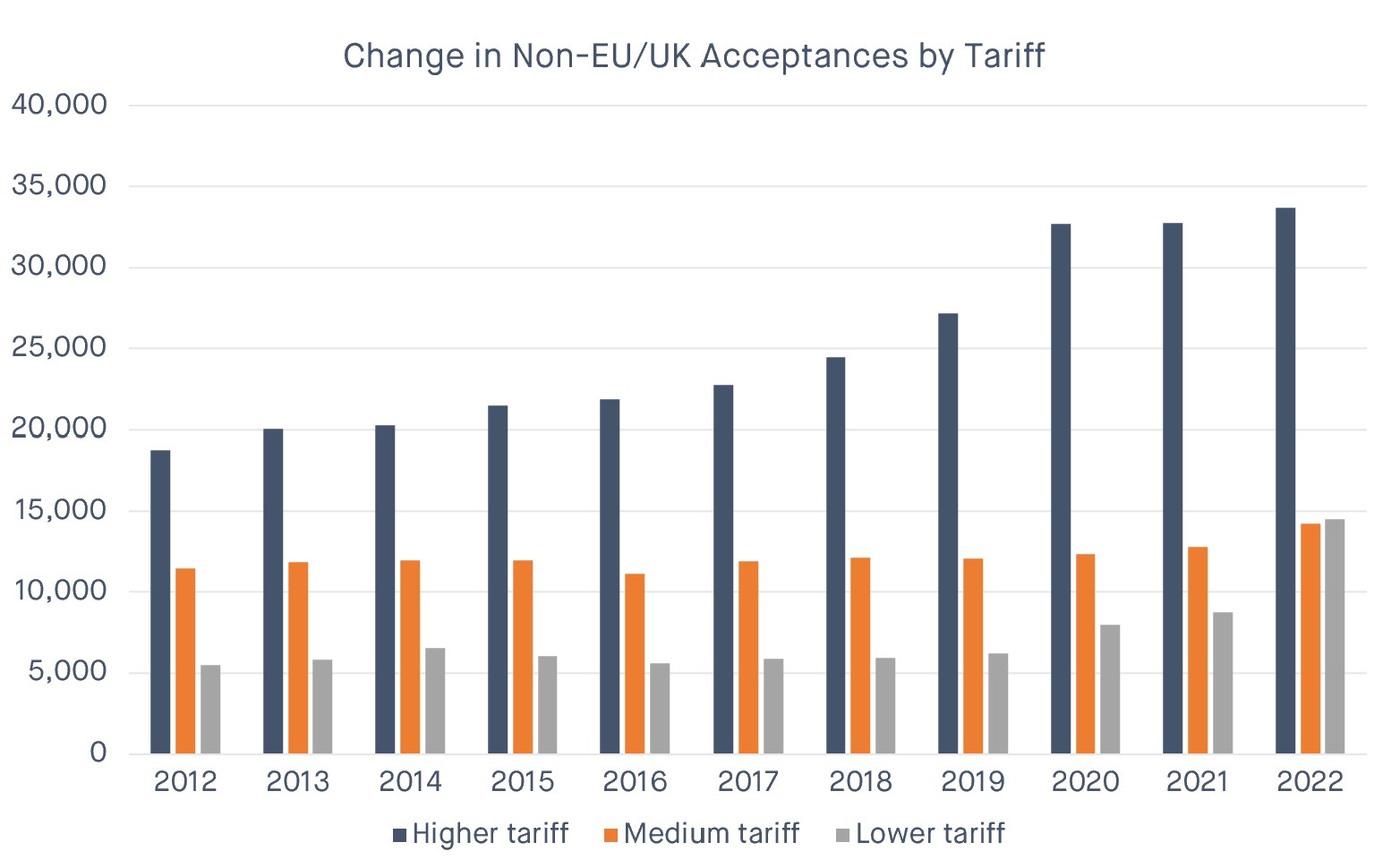 The chart above shows how the increase in non-EU acceptances is split across the various provider tariff levels. Tariff groups are defined by UCAS and are based on the average levels of attainment of a provider's accepted applicants.

The chart shows that non-EU students have a tendency to prefer higher tariff institutions. In 2022, 54.0% of Non-EU acceptances were to higher tariff universities. Since 2012, this has averaged 56.2%. It is likely that international students place a higher value on their university choice, than on the field of study that they choose to enter into. Previous data suggests that this trend is particularly strong with students from the Asia-Pacific region (particularly Singapore, China, Malaysia, and Hong Kong). 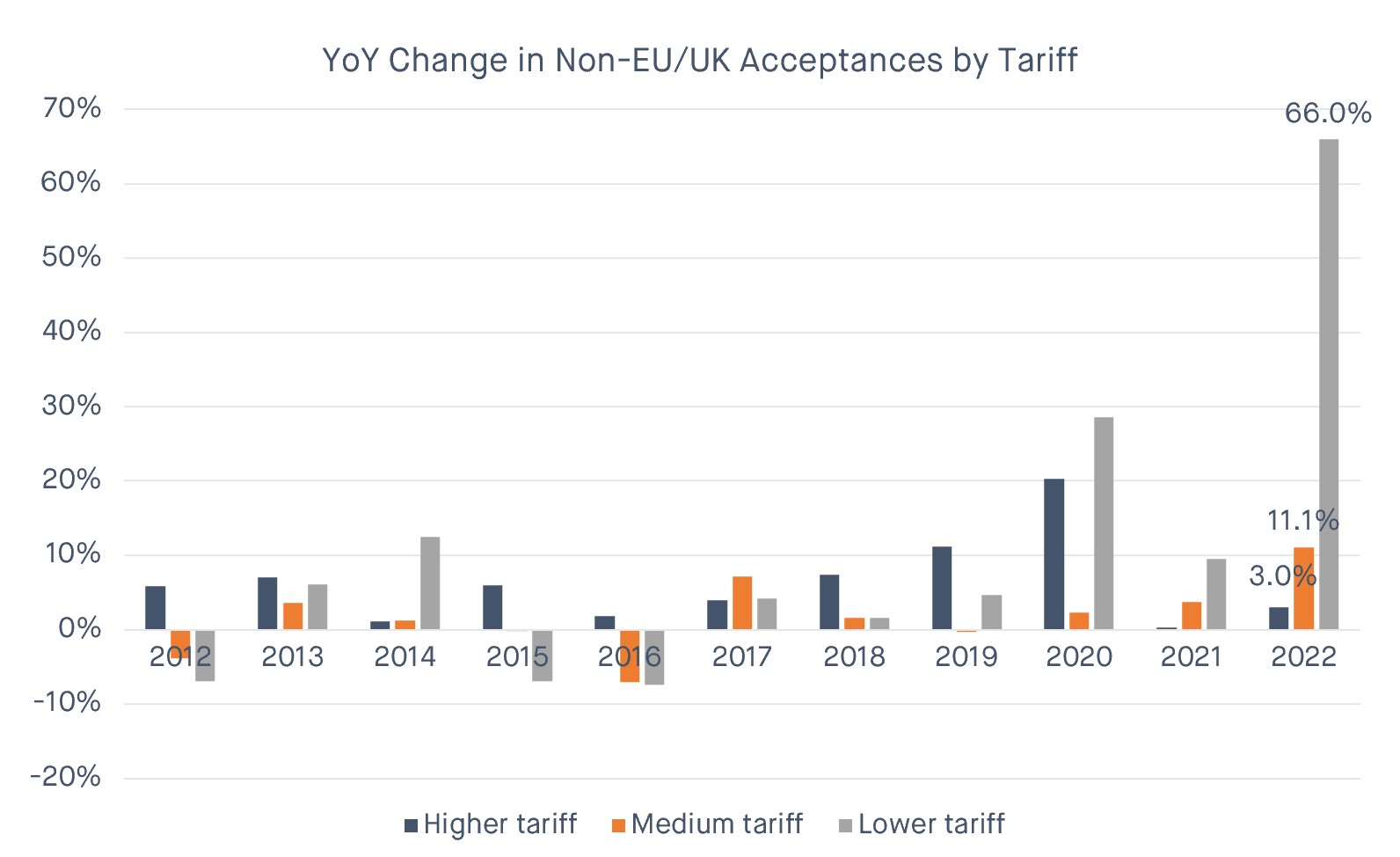 The chart above shows the year-on-year changes in non-EU acceptances by provider tariff levels.

According to the data, whilst non-EU acceptances increased year-on-year at all provider tariff levels, the 66% increase in Lower Tariff acceptances was by far the biggest. This growth has resulted in Lower tariff acceptances of non-EU students making up a higher proportion of total acceptances than their Medium tariff counterparts for the first time (23.3% vs 22.8%).

This changing trend is likely a result of different countries (outside of the Asia-Pacific region) beginning to make up a more significant proportion of non-EU applicants. Students from these countries are likely to have different priorities in choosing their university and course, causing a slight shift in previously established trends. 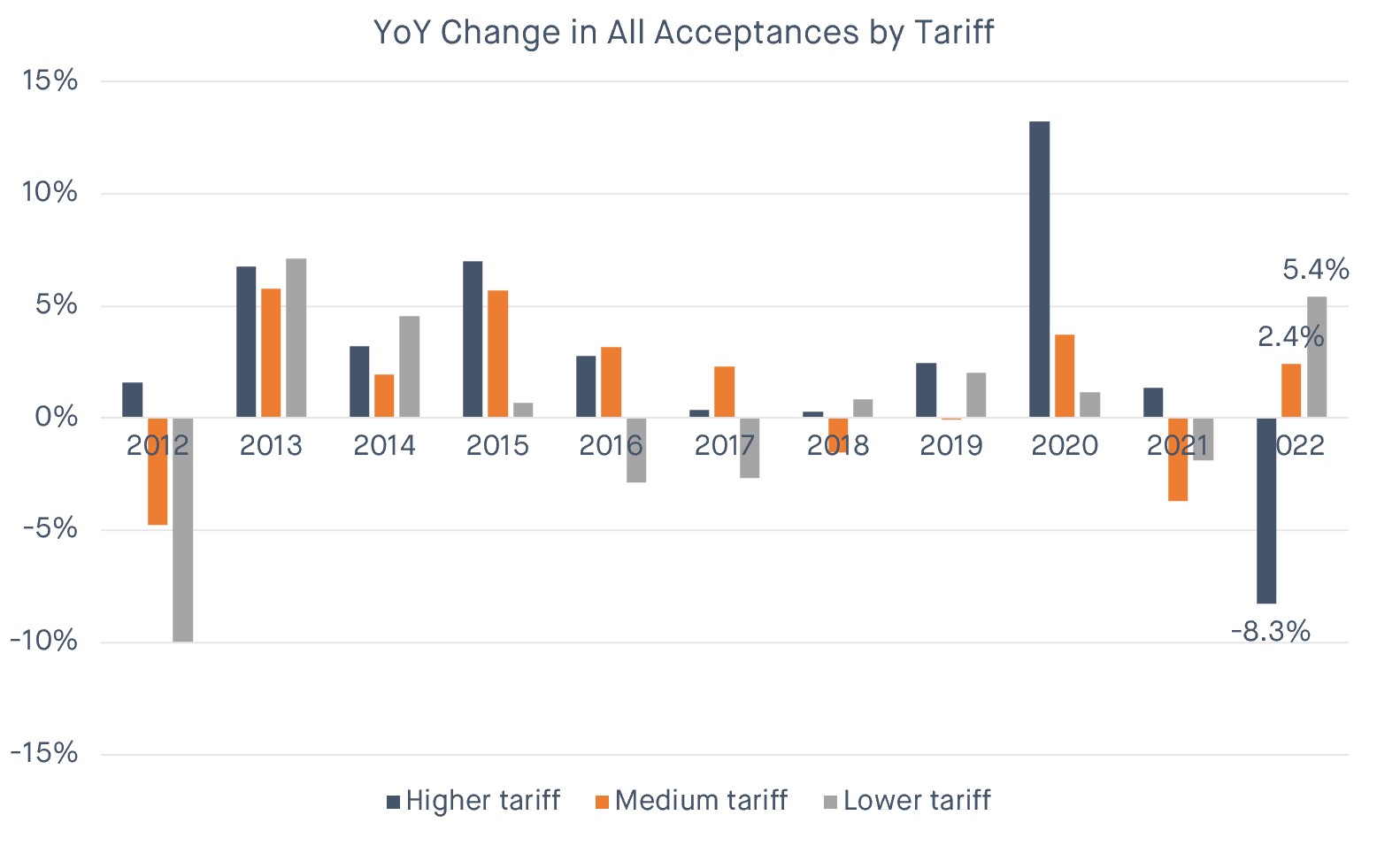 The chart above shows the year-on-year changes in all acceptances by provider tariff levels. 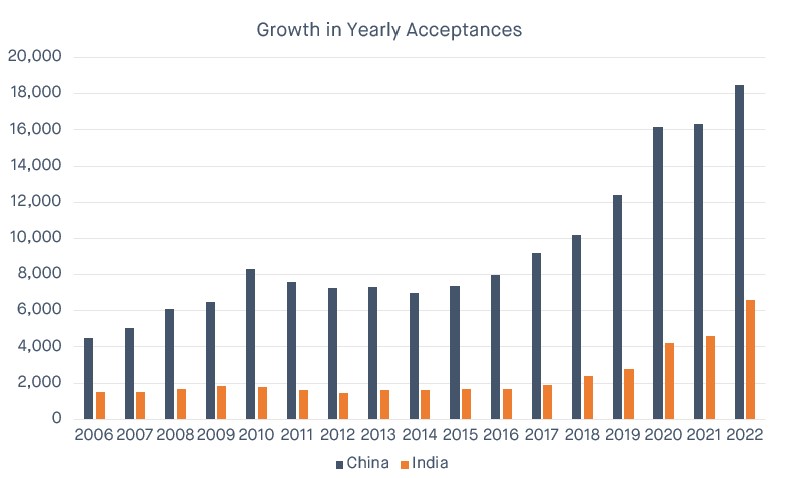 The chart above shows how the number of yearly acceptances of students from both China and India have varied over time.

These countries are now the most significant international markets in terms of total acceptances.

The sudden growth in Indian students has been more recent than that of China. In 2012 just 4% of non-EU acceptances were made to Indian students, this figure is now over 10%. Whilst numbers have grown consistently since 2012, this large increase can mostly be attributed to the sudden rise reported since 2020. 2022 showed year-on-year growth in acceptances from India of 43.7%. Since 2012, this number has grown by 357.4%. 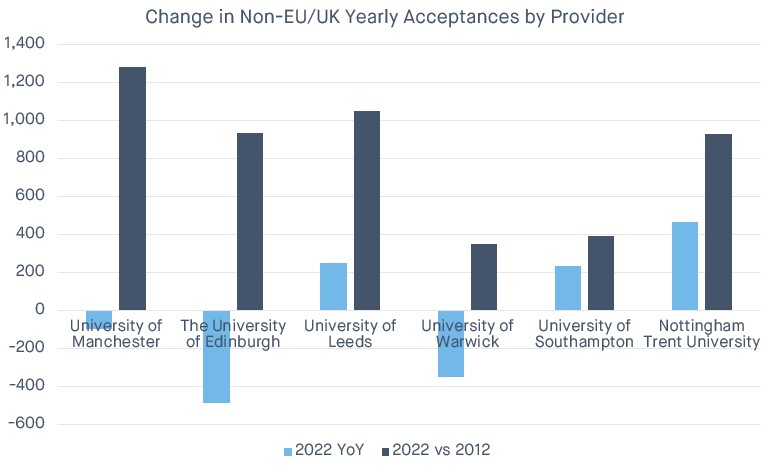 The chart above shows how non-EU international acceptances changed in 2022 compared to the previous year, and compared against 2012, at some specific institutions.

The chart shows that whilst some universities have reported a decline in non-EU acceptances this year, they have shown reasonable growth since 2012. For example, whilst numbers fell by 485 (-19.2%) at The University of Edinburgh this year, overall total numbers are up by 935 (+84.6%) when compared to 2012.

Some of the universities, such as Nottingham Trent University, which exhibited strong growth this year (+465 acceptances, +75.61% YoY), have had several years of strong growth. As such, numbers are now up significantly compared to 2012 figures. Nottingham Trent has grown by 930 students over the time period, representing total growth of 620%.

Whilst it is useful to use national figures to analyse changes in the market, it is important to recognise that different locations and universities can exhibit very different trends. The data also highlights how quickly historical trends can change.

For stakeholders in the student accommodation market, having access to timely, independent and granular data will continue to grow in importance, leading to more informed decision making.